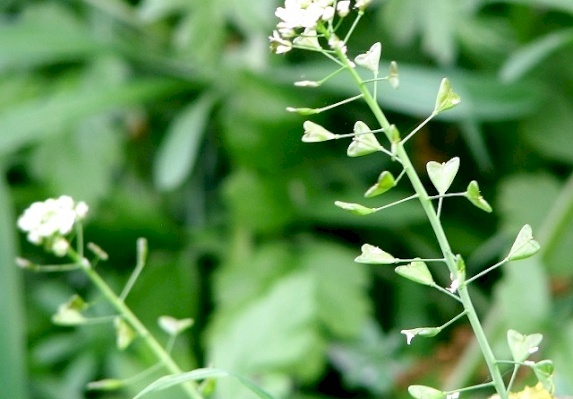 A common annual of the Brassicaceae family, this small plant grows to a height of 25-50 cm. and is a common Mediterranean herbaceous plant. Thin stems rise from a rosette of leaves. They are rough and hairy at the base and smooth out as they rise. The leaves are alternate and ovate, some entire and some dentate at the margins.

Its flower is characteristic of this family, a cruciform design with organs in multiples of four. The four white petals are significantly longer than the sepal, the ovary is superior, and the nectaries are at the base of the four interior stamens. These encourage pollination by insects.

Flowering period: It flowers from December to April. The fruit is a heart shaped "pod" for which the plant gets its name from.

Ecology: It is found in a variety of habitats, from open fields, riverbanks, to roadsides and empty lots in Mediterranean and semi desert habitats.

Common and medicinal uses: This plant has a myriad of medicinal properties.  It effects the blood circulation and  is used to remedy internal bleeding and menstrual pain. It is a known diuretic and prevents "burning" of the urinary channel. An infusion of the leaves is usually used to remedy such problems of the digestive system as chronic acid stomach, diarrhea, and intestinal pain as well as menstrual pain.

Distribution in Palestine: It is found   in the upper Jordan Valley, the mountains and deserts of Samaria and Judea, and the Dead Sea valley.