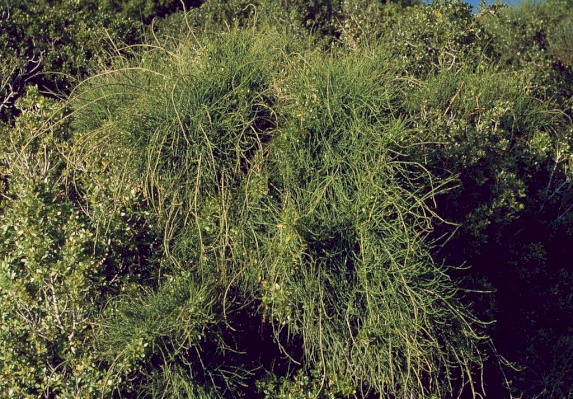 By Franz Xaver [CC BY-SA 3.0 or GFDL], from Wikimedia Commons

A perennial vine of the Ephedraceae family which can be found hanging down as well as climbing up a tree, a bush or even a fence or a rocky terrain. The thin, green, jointed branches have small reddish transparent leave that sprout at the joints in the fall, but are leafless in spring and summer.

Flowering period: It flowers from April to October and is pollinated is by insects. The seed is enveloped by a fleshy red tissue that is eaten by birds, and then dispersed in their excretions.

Ecology: It flourishes in rocky terrain in the shrublands and sparse woodlands of the Mediterranean region. The fruits are eaten by the Yellow vented Bulbuls that also carry them and reseed them in new shaded locations. The fruits are also widely eaten by migratory Warblers in the early autumn migration.

Common and medicinal uses: An infusion made from the stem is used as a treatment for coughs and asthma, low blood pressure and allergic reactions. It has been found to contain ephedrine; an addictive substance that can be used to relieve respiratory problems. its also Anti-carcinogenic, Anti-inflammatory, and Demulcent.

distribution in Palestine: It has been found to be quite common in the mountains of Samaria and Judea.