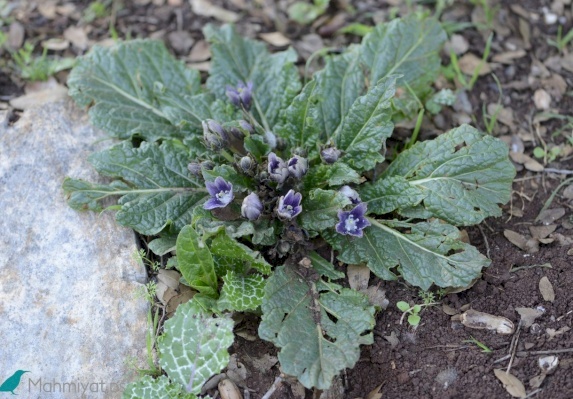 This perennial herbaceous plant of the Solanaceae family is easily identified by its exceptionally large leaves arranged in a rosette. Its dark green simple leaves have a light-colored central vein and sinuate margins .They can spread out in a rosette with a diameter of about one half meter, but the plant will grow to a height of only 20-30 cm.

The many blueish-purple flowers bloom on a long peduncles in the center of the plant and are 2-3 cm in diameter. The flowers, characteristic of this family have organs in multiples of five, including a bell-shaped five-lobed corolla with five sepals and five stamens.. It has a large root that develops in lobes, in a form reminiscent of a human body. This is the source of many folk beliefs that sprang up in various places since ancient times.

Flowering period: It flowers from December to March. The cluster of tomato-like yellow-orange fruit ripen in the beginning of summer with a distinctive sweet odor. The fruits and seeds contain a number of highly toxic alkaloids.

Ecology: It is common in fields and grasslands of the Mediterranean region, but in small numbers.

Common and medicinal uses: The crushed fruit are used as compress to relieve pain in a specific location. Fried shavings of the root are spread to remedy snake bites, scorpion stings and bleeding wounds. It has been known as a treatment for fertility problems since ancient times. Pseudo-estrogens and the alkaloid scopolamine have been identified in the fruit. The fruits are known to be poisonous unless treated in a special way.

Distribution in Palestine: It is found in the upper Jordan Valley, the mountains and desert of Samaria and the mountains of Judea.

A common belief says that taking a bush of an Autumn Mandrake off its roots brings a curse, but getting one as a present brings good luck and love. Therefore people used to tie a dog to the bush and try to scare it away and get the bush without the curse.