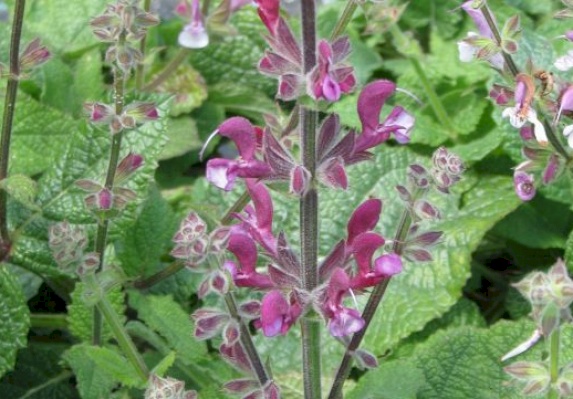 A herbaceous perennial of the Lamiaceae ( Labiatae), endemic to the Eastern Mediterranean. It has the characteristic square stem, opposite branches, and simple emarginated leaves that grow opposite and perpendicular to each other. It can grow to a height of 80 cm and more. It is lightly covered in hairs and glandular hairs.

The inflorescence is organized with six maroon colored flower buds per whorl, 7-10 whorls per inflorescence, and 1-5 inflorescent stems per plant. The flowers bloom from the base first and upwards as time passes.

It has a two-lipped, open-mouthed tubular corolla "designed" for pollination by large bees, characteristic of the family. The lower lip is divided into three lobes, with a wide middle one. The two-pronged stamen has an infertile lower anther on which the bee pushes, causing the pollen from the upper anther to stick to the bee's back. This pollen will be transferred to one of four ripe stigmas in another flower that the bee will visit. Self-pollination is avoided by the delayed ripening of the stigma, compared to the anther, in each flower. The "ripening" of the organs entails change in location/orientation to enable cross-pollination and avoid self-pollination. The ovary is superior.

Flowering period: It flowers from March to June. The fruit are four, three-sided, one-seeded nutlets per flower.

Ecology: it will regrow every winter from soil-level. It grows in humid areas of woodlands and open fields as well as deserts and semi deserts.

Distribution in Palestine: It is commonly found in the Judean Desert and Mountains, the mountains and desert of Samaria as well as the Dead Sea Valley. In the drier areas the flowers have a deep red/crimson color.