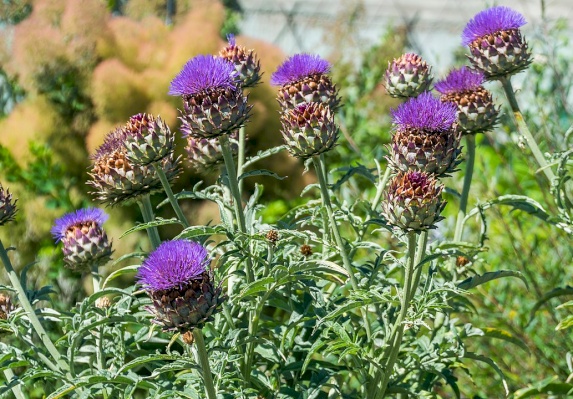 Also known by its English name Globe artichoke, or just Artichoke, this plant species from the family Asteraceae is very well known as edible vegetable worldwide. Globe artichoke is native to the Mediterranean shrub lands and woodlands.

The wild species of globe artichoke is Cynara syriaca, whose common name is wild artichoke.
Cynara scolymus grows up to 1.4–2 m high, with deeply lobed, silvery-green leaves that are 50–82 cm long. The leaves are alternate, distribute in rosette, are dissected, pinnate, serrate and with thorns. The flowers develop in a head from an edible bud about 8 to15 cm diameter with numerous triangular scales. The flower-head is formed by receptacle and inner bracts of the flower buds before the flowers bloom. The edible portions of the flower-heads consist of the lower fleshy portions of the bracts and an edible base. When the buds bloom, they produce violet flowers. In the Mediterranean region, globe artichoke flowers from June to August.
Nowadays, cultivation of the globe artichoke is concentrated in the countries around the Mediterranean basin, being thus largely used in the Mediterranean diet both for its peculiar taste and for its health promoting effects. The main European producers are Italy, Spain, and France. However, it is also cultivated in the United States and, most recently, artichokes have been grown in South Africa.
Cynara scolymus has medical properties, like the fact that its edible part represents a good source of bioactive compounds such as polyphenols, inulin, fibre and minerals. In addition, the total antioxidant capacity of artichoke flower heads is one of the highest reported for vegetables.

Further interestingly is that there are records of use of this plant still by the ancient Greeks and Romans.