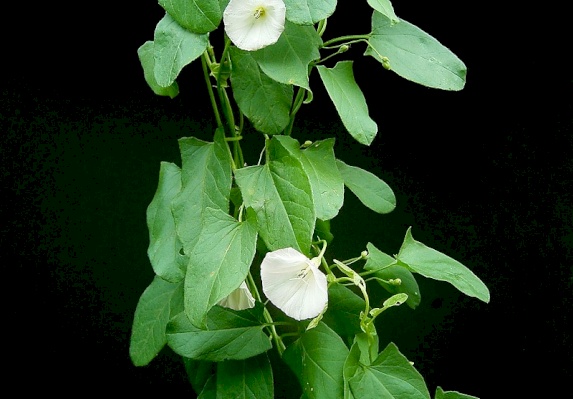 By Frank Vincentz [GFDL or CC-BY-SA-3.0], from Wikimedia Commons

This is a perennial plant species from the botanical family Convolvulaceae, whose common English name is Corn bind, Field bindweed or even Morning-glory.

Corn bind is native from the Mediterranean region of Europe and western Asia, but it was introduced to North America in the early 1700s. It is now also distributed in several temperate regions worldwide and considered a weed in most of the countries. Convolvulus arvensis grows well in disturbed areas, such fields, roadsides, wastelands and in different soil conditions, such moist to dry soils.

This plant is found in woodlands, shrub lands, steppe, desert and extreme desert habitats and it is very drought tolerant. Corn bind is easily found in most of the Palestine and wider area.
This persistent herb vine weed forms dense, tangled mats on the ground or climbing up shrubs, fences and trees, with its trailing, almost twining stems. The stems are pubescent or glabrous and can grow 1.5 m long or longer. Its underground rhizomes can reach 2.6 m long, whilst the roots can reach over 6 m long penetrating deep into the soil. The flowers are trumpet/funnel-shaped (five fused petals), 15-26mm long, five lobed, hermaphrodite and bloom in summer. Corn bind produces several white to pink or purple flowers that close in the afternoon, open again next morning and are pollinated by bees and flies. The fruits are like 5 to 7 mm capsules that open and release four black seeds, which can remain viable in the soil for at least 20 years.
On one hand, C. arvensis is an aggressive competitor, robbing nutrients, moisture and light from other plants, competing with native species. Very interestingly, on the other hand, is that C.

arvensis is reported to have been used in traditional medicine since 1730s.Traditionally, it has been used to treat skin ulcers, healing wounds, inflammation and swelling. Furthermore, in the traditional medicine the whole plant (except roots) can be used against abdominal worms and abdominal pain in children. In addition, recent studies showed that C. arvensis contains cytotoxic activity against tumour cell lines, inhibiting tumour growth in mice by 77%. An extract of C. arvensis is also found to inhibit the growth of blood vessels and enhance immune function.