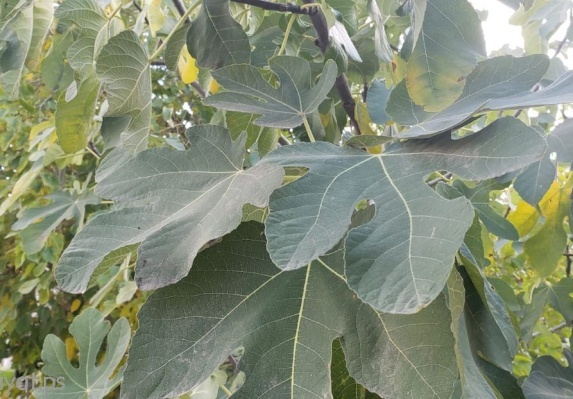 This plant species is a tree from the botanical family Moraceae, commonly known as Common fig or Adriatic fig. It is native to the Mediterranean region, Western Asia and Middle East, but it is worldwide cultivated because of its nice fruits and as ornamental plant.

The common fig is distributed in most of Palestine and wider area, but is rare in some regions. This plant species is found in habitats like smooth-faced hard sandstone outcrops of the Mediterranean woodlands, shrub lands and deserts and its conservation status is least concern.
Ficus carica is a tall tree species that grows up to 9 m high, whose stems are strong, with multiple and twisting branches, commonly spreading wider than in their height. This is a dioecious plant, which means that there are female trees of Ficus carica and trees that are male. The leaves are alternate, palmate, with 3 to 5 lobes.

The flowers do not have petals and form a cluster in a special kind of inflorescence called syconium, which is typical for Ficus genus. A syconium is formed by a fleshy and enlarged hollow receptacle with up to 7000 multiple ovaries on the inner surface.

Each of the ovaries is from a highly simplified flower, which are not visible from the outside of the syconium. The small ostiole is a little hole that serves as a passage locate in the middle of the fruit.

Due to this unusual arrangement, the plant shows an interesting symbiosis with a wasp species, a very specialized pollinator adapted to enter the ostiole and move within the fruit in order to pollinate the flowers. This plant is therefore pollinated by an up to 2 mm small wasp, called Blastophaga psenes.

Since the wasps do not lay eggs in the fruits of the female fig trees, syconium of male trees are more probable to have wasps’ larvae. Normally, in fresh cultivated figs wasps are not found, because the fruits are coming from female trees of a domesticated variety that does not require pollination for fruiting.

Furthermore, the mature fig syconium is also called a multiple fruit because of its numerous ripened ovaries.

The flowering time of fig ranges from April to July.
Interestingly, Ficus carica has been cultivated for thousands of years, being one of the first plants that were cultivated by humans.

Rests of fig trees were found as a sub fossil from 9400–9200 BC in a Neolithic village in the Jordan Valley. Curiously, these findings date from earlier than the domestication of wheat and legumes, meaning that figs were the first or one of the first plants used in ancient agriculture. In addition, figs were already widespread in the ancient Greece, when Aristotle had even made notes on the reproduction of the tree and noticed that the plant has individuals female and individuals that are male.
The common fig has been also widely used in traditional medicine against diseases related to digestive, endocrine, reproductive and respiratory systems (e.g. sore throats, coughs, and bronchial problems), against gastrointestinal (colic, indigestion, loss of appetite, and diarrhea), urinary tract infection and cardiovascular disorders.