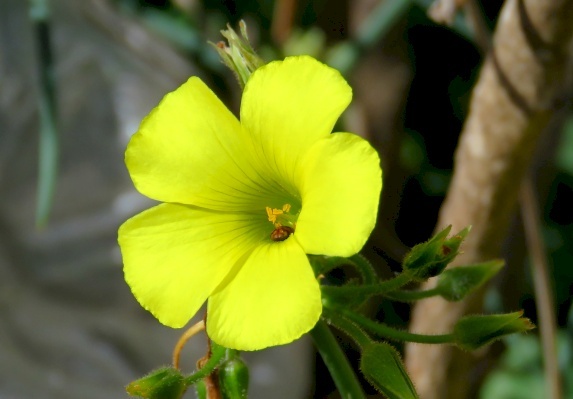 Nodding Wood-sorrel is a geophyte plant belongs to the Oxalidaceae Family. Stems are sparsely pubescent; shoots arise from a short vertical stem that is attached to a pale brown underground bulb. Each bulb is capable of producing over 20 small whitish bulblets each year. Leaves arise from an enlarged basal stem tip, and are alternate, rosette, and compound, trifoliate. Flowers are bright yellow and are arranged in umbel-like inflorescences; shaped like a funnel. These inflorescences generally have fewer than 20 flowers each.

Ecology: Disturbed habitats, it widespread as a garden weed, and belongs to the plurureginalbor-trop chorotype.

Distributions:  It is Indigenous to South Africa, and grows in Palestine as an invasive species. It distributed in almost all ecosystems in Palestine, specially Mediterranean Woodlands and Shrublands.