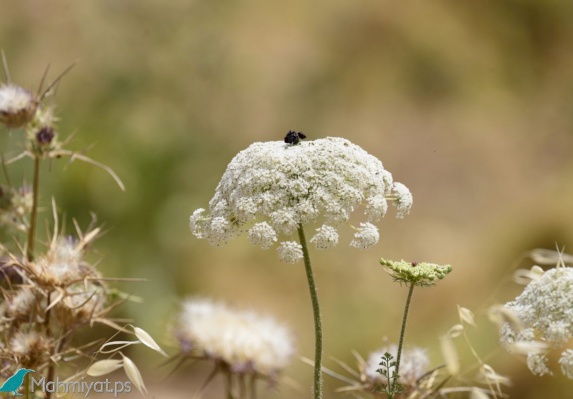 Wild carrot is an annual or biennial plant belongs to the Apiaceae family. The stem is erect, branching, grooved, rough-hairy or bristly, 20-50 cm tall at the mature vegetative stage and 120-150 cm tall when flowering.

Flowers are white; terminal, compound umbels, a whorl of several 3- to 5-branched bracts at the base of each compound umbel; and a single flower arising from the Centre of the compound umbel is often dark purple, flowers mainly bisexual in primary umbels, in umbels of higher order an increasing number of male flowers may occur in addition to bisexual flowers.

Ecology: Wild carrot is growing in rough grassland, along coastal cliffs and in dunes, overgrown thickets, weedy meadows, along railroads and roadsides, abandoned fields, degraded prairies and waste lands. The plant is glycophyte in terms of salt resistance; it belongs to the Mediterranean area.

Uses: The swollen taproot of carrot is eaten and is an important market vegetable. The roots are consumed raw or cooked, alone or in combination with other vegetables as an ingredient of soups, sauces and in dietary compositions. Young leaves are sometimes eaten raw or used as fodder; the flowers are sometimes battered and fried. The leaves of the wild carrot may cause photodermatitis, so caution should also be used when handling the plant. It has been used as a method of contraception and an abortifacient for centuries.

Distributions: This plant is native to Europe, southwestern Asia and North Africa, and naturalized to North America and Australia. In Palestine, it distributed in Mediterranean Woodlands and Shrublands, Semi-steppe shrublands, Shrub-steppes.