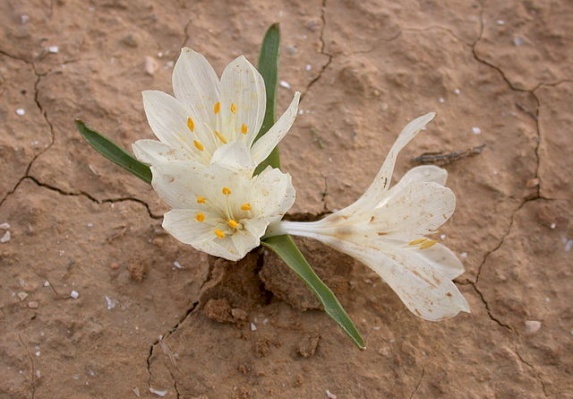 Egyptian Meadow-Saffron is a geophyte plant grows from a corm which is oval measuring 2-3.5 cm; this plant belongs to Colchicaceae family. The leaves emerge and develop at the same time as the flowers, they are largely hairless and elongate after flowering to form a cone which protects the developing fruits.

The leaves are rosette and smooth from the margins.

The flowers are white or pink, the inner tepals are ridged with just one or at most very few teeth at the base, near the base of the anther. The anthers are black, but get covered by yellow pollen. Flowers are hermaphrodite, and the flowering periods are December, January, February. The fruit is a green, irregularly shaped capsule, up to 35 mm long and 15 mm across which contains round, globular seeds.

Ecology: The plant grows in several habitats including sand, desert, and Shrub-steppes. The plant is psammophytes of steppes and deserts in terms of drought resistance, and glycophyte  in terms of salt resistance; it follows the Saharo-Arabian Chorotype.

Uses: Extracts from Egyptian Meadow-Saffron are used in traditional medicine to treat arthritis, rheumatism, gout and abdominal colic. The anti-inflammatory drug colchicine was originally extracted from closely related species to this plant.

Distributions: Found in Tunisia, West to Jordan, and Saudi Arabia and other areas. In Palestine it grows mostly in the desert areas.