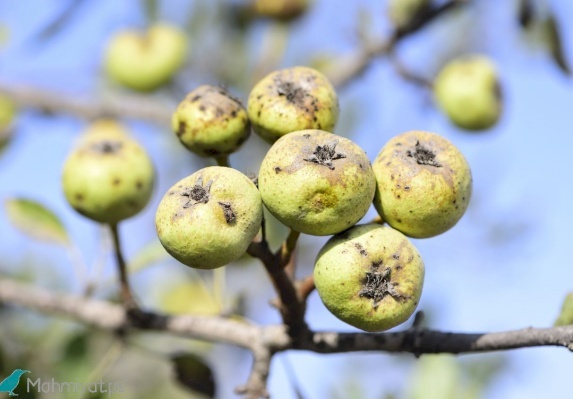 IUCN red list status: least concern
Local status: least concern
Pyrus syriaca is a Phanerophyte plant belonging to the Rosaceae family, commonly known as the Syrian Pear. The stems have spines and reach up to 8m. The leaves are alternate, entire, dentate, or serrate, the flowers are white, flowering in March and April It is a deciduous tree pollinated by insects, this plant belongs to the Med - Irano-Turanian chorotype.

Grows in several habitats such as Mediterranean maquis and forest, dry stony slopes, forest remnants, and field edges. The plant is a moderately cold-hardy plant, tolerating temperatures down to at least -10°c. Grows well in heavy clay soils. It tolerates air pollution, extreme moisture, and a variety of soil natures if they are moderately fertile. It is the only species of its genus that grows as flora in Lebanon, Turkey, Syria, and Palestine.

The seed of several species in its family contains cyanogenic glycosides. After ingested, these compounds break down in the digestive tract to release cyanide. Though this toxicity, it is used in small quantities in both traditional and conventional medicine to stimulate respiration and improve digestion. The fruit is edible, but it has not good taste as the European Pear, mostly because of hard, stone-like objects found in the skin. The ripe fruit falls to the ground and when it starts to rot, the smell attracts wild pigs. The pigs eat the fruit and distribute the seeds.

Distribution in Palestine: Mediterranean Woodlands and Shrublands and Semi-steppe shrublands.