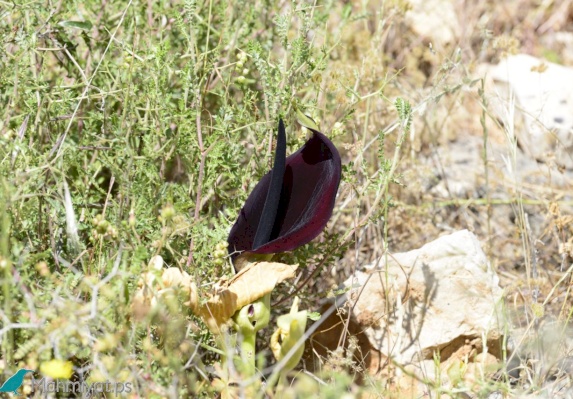 This geophyte of the Araceae family, native to the Mediterranean area, may be found in clusters in shaded areas.

The petal-less, sepal-less flowers develop in the lower part of the 30 cm high dark purple spadix, the males above the female flowers. The female flowers are receptive before the male flowers of the plant produces pollen, thus avoiding self-fertilization. The pollen is produced after the female flowers have been fertilized and wilted. The spadix is enclosed by a large brown spathe, a wide thick tongue-like leaf. The flower emits a smell like that of rotten fruit which attracts fruit flies, the pollinators. They get trapped in the cup formed at the bottom of the spathe. They will be freed after pollination or collection of pollen.

The leaves are a rosette spreading from the stem base. The simple leaf is large with an arrow shape. The triangular leaves are deeply notched in the center, forming two triangles with rounded points 25 cm. in length, with a long stem.

Flowering period: It flowers from February to April

The fruit is a cluster of red-orange berries which are attractive to birds.

Ecology: It is found in shaded areas in a wide variety of habitats, from mountainous Mediterranean woodlands to the desert.

Common and medicinal uses: The bulb and leaves are toxic but the plant is edible after prolonged cooking and leaching of the poisonous components. Dried, powdered leaves mixed with olive oil were used to remedy acne. The poison causes severe vomiting and was used to induce abortion of pregnancy as well as a remedy for parasitic worms and cancer. Its potential as a cancer treatment is currently being studied scientifically.

Distribution in Palestine: It can be found in the Upper Jordan Valley as well as the mountains and deserts of central highlands and Jerusalem wilderness.

Leaves of the Palestine arum.