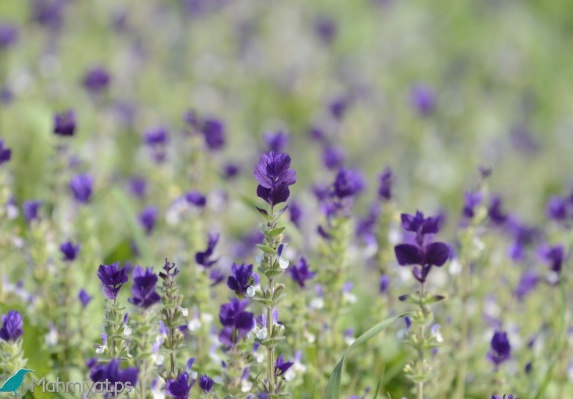 an annual herbaceous plant of the Lamiaceae family (formerly Labiatae), it grows to a height of 15 cm. and is found in the Mediterranean region. It is known for its "crown" of purple petals at the tip of the flowering plant, which are not seen on all specimens.

Its hermaphroditic flowers are white with purple margins. Its oval crenulated leaves grow opposite each other on the square stem characteristic of this family. The whole plant is covered with small hairs and fragrance glands that this plant family are known for.

It has the two-lipped, open-mouthed tubular corolla that is advantageous for pollination by bees. The bottom lip has three lobes, with a wide middle lobe. The stamen has two branches, with only one of them fertile. The insect must push on the lower sterile one to get to the nectary. This causes the fertile anther to lower and touch the bee, leaving a trail of pollen on it. This pollen will pollinate a fertile stigma as the bee visits other flowers.

Following pollination, the fruit forms on the stem. When the fruit (a dry nutlet) ripens, the five-lobed calyx encloses it and prevent the seeds from dropping to the ground. The fruit passes the dry season in this manner, opening when the rains come and wet the fruit, thus enabling the seeds to drop and sprout.

Ecology: It can flourish in such diverse habitats as Mediterranean woodlands, scrublands and semi-deserts. It can "carpet" fields and prefers the southern sunnier slopes.

Common and medicinal uses: The leaves are aromatic and antiseptic. They are used as a gargle to remedy sore gums. The leaves and seeds may be used raw or cooked. The leaves may be added to salads, soups, cooked greens and meat .The aromatic oil may be used to flavor certain beers and wine.

Distribution in Palestine: Can be found throughout Palestine in the various habitats