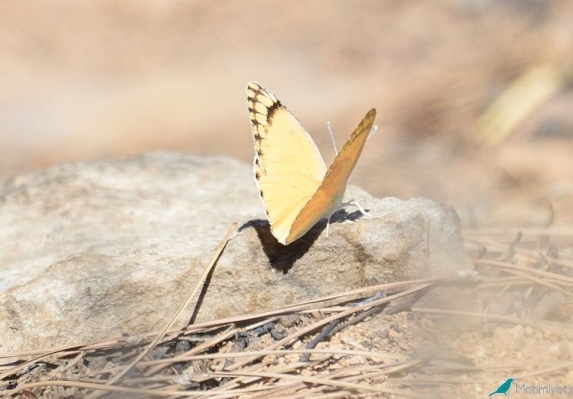 Colotis fausta / Madais fausta. Among the outstanding summer butterflies, the Large Salmon Arab is one of the smaller members of the Pieridae family, the whites and sulphurs. It is common in a limited area including the Middle East through to India and parts of eastern Africa. In these areas it is known to fly from April to November, its appearance apparently dependent on climatic conditions, such as rainfall. It can be found in the Mediterranean woodlands as well as in desert localities near its host plant, Capparis spp, caper bush. In each habitat it will be found near the species of caper bush that flourish  in its conditions. As mentioned, the habitat conditions can impact the size and coloration of the butterfly. Northern migration during the summer is known to occur.

It is known to raise three generations.

The male has a salmon-buff background color on the upper side of the wings, which is lighter in the drier areas. The underside is a pale yellowish white color with a rosy flush in moister localities. Only the males have a small patch of specialized brown scales on the base of the forewings for sensing the female pheromone. Although they all have a black spot in the forewing and dark markings on the margins, they are darker and more prominent in the female. The females can have coloring similar to that of the male, but paler, or they can be white with more prominent dark markings. The wing size ranges from 30-40 mm with the dry season form being smaller and lighter than that of the rainy season.

The female lays a single white conical egg, 0.8 mm in length, on both sides of the caper bush leaves. Within a few days the eggs acquire 2-3 reddish rings and become a dark yellowish-gray by the hatching time. It hatches as a two mm yellow hairy larva which develops into a dark green caterpillar, 22-24 mm in length, with a thin white line on the back. It forms an 18 mm long chrysalis hanging on the caper bush or objects nearby. The chrysalis is green or light cream-colored that turns brown as time passes.