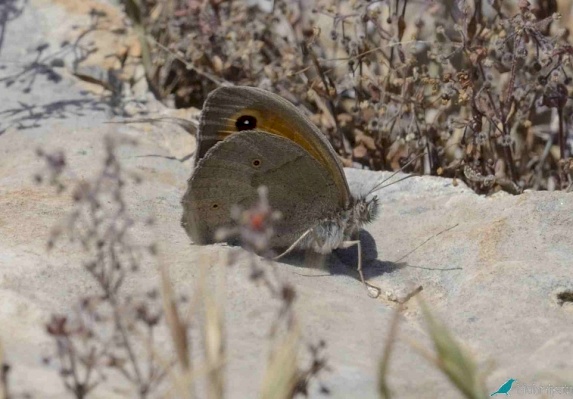 One of the most common Mediterranean species of the Satyridae family, the Turkish Meadow Brown has a limited distribution in the eastern Mediterranean area. It prefers damp locations with grassy vegetation and shrubs. It can also be found in the mixed oak and pine woodland characteristic of this area.

The earliest observations of the new generation are usually in the north of the Jordan Valley in February, however in most areas they are seen in April. In the northern area males can be seen until June, as the females settle among rock and shrubs for estivation in the summer months. Between September and October they reappear to lay their eggs.

This is a small butterfly whose females, with a wingspan of 23-27 mm, are larger than the males whose wingspan ranges from 19 mm to 21 mm. The orange upper wings have wide grayish-brown margins. On the forewing is a large black spot with a dot of white at the center, "eyes". The underwing is a cryptic grayish brown. Only the male has four small "eyes" on the underpart of the back wings.

When the eggs that are laid in the fall hatch,  the larva enter diapause until their host plants, meadow grasses (Poacae), ripen in the spring.

The caterpillar is green with a dark green head and reaches a maximum length of 28 mm. It has a narrow yellow line on each side of its hairy body.  The hanging chrysalis is 16mm in length. It starts as a green color and slowly turns brown.