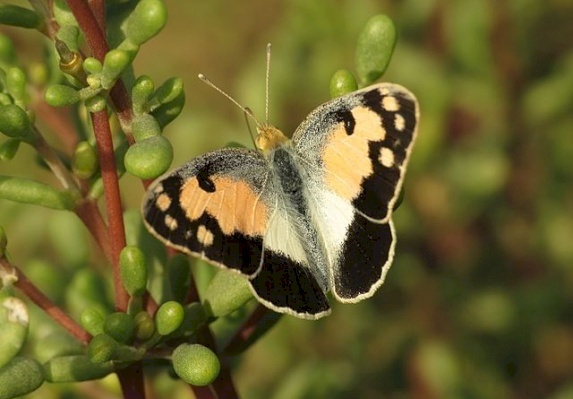 This small-sized butterfly belongs to the family of ‘yellows and whites’ – Pieridae.

In Palestine, it is a common species all throughout the region. The Blue spotted Arab is usually seen in arid, desert regions with very little and open vegetation, including rocky areas. The typical habitat of this species is like in the Ein Gedi oasis region.

This butterfly species flies all the year round.

The larval food plant is Toothbrush tree (Salvadora persica). Breeding occurs during the summer season and the eggs are laid in groups on the host plant. The eggs are bottle-shaped with deep cut lines on the  surface and are initially white in colour and later turn to pale blue. The newly hatched larvae are light green in colour with two black spots and a shining white marking on the back side of the head region. As the larvae grow older, the black spots disappear while the mark becomes more prominent and also develops a black lining around it.