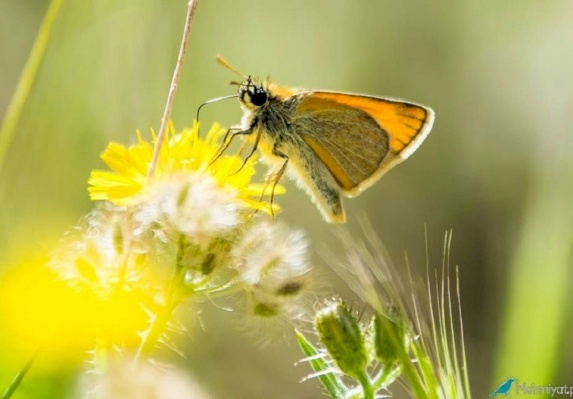 This ‘Orange Skipper’ butterfly also commonly known as the Small Skipper belongs to the family Hesperidae and is one of the most common orange skippers found in the middle-eastern Mediterranean region.

It has a wide distribution in the Mediterranean region extending from North Africa, Europe and Asia Minor to Central Asia and Iran. In Palestine, it is very common in the mountaineous region in central Palestine.

It prefers dry and open habitats with tall grasses, such as grasslands, border areas of fields and meadows near to woodlands.

Due to preference for tall grasses, it is also known as the orange grass skipper!!

This small-sized species has a wing-span of 25-30 mm and the body, wings and tips of antenna have a very rusty or brownish but bright orange colour. The body has a silvery white colouron the underside and the most unique character which makes it easy to identify this species are the characteristic black wing margins (both fore- and hindwings).

The males also have a short but prominent black line on the lower edge of the forewings, on the upper side. This black line marks the presence of scent scales which help in attracting the females during mating.

This species is seen to fly from April to July, while in the Palestinian region, it has been observed to fly earlier from February. It is a very good flier although they are mostly observed resting in the sunlight on flowers and grasses with their wings half open and the orange colour of their wings shining brightly.

Eggs are laid on the host plants from July to August and the larval foodplants are Phleum pratense,  Holcus  mollis  and  Dactylis  glomeratus which are mostly belonging to the family of grasses and sedges.The caterpillars after newly hatching eat their own egg-shells and they hibernate in the cocoon which are formed at the lower part of the grasses, nearer to the ground or soil. The larvae usually hatch in June. The adults are very interestingly observed to be attracted towards purple coloured flowers for nectaring e.g. thistles and knapweeds.

The  Small Skipper looks very closely similar to the Essex Skipper (Thymelicus lineola), the only difference being that in the Essex skipper, the tips of the antenna are black in colour.