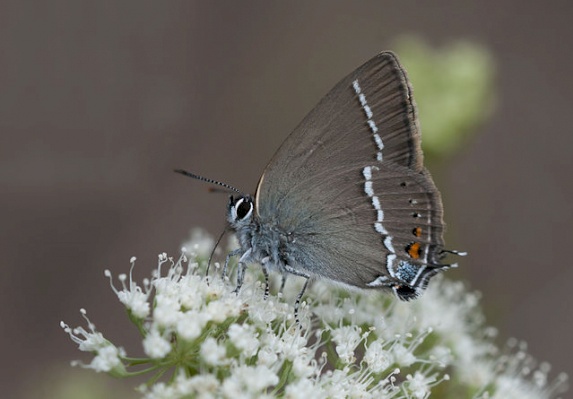 This is a common species from the family Lycaenidae and has been widely recorded across the Mediterranean region extending from southern Europe to the Middle east. It has also been observed in central Europe.

In the south Mediterranean region, it has been recorded in north and central Palestine during late spring and summer.

It has a wing-span of 34-36 mm. The upperside of both fore and hindwings are earthy brown in colour with a very light brown oval shaped marking on the innerside of each forewing. The hindwings have a small black tail on the lower margin of each side.

The unique character that helps in identifying this species in the field is the large blue spot and prominent bright white coloured line on the underside of the hindwings.

The blue spot is located towards the lower margin of the hindwings. The base colour on the underside of both sets of wings is also earthy brown.

A similar kind of small blue spot is also seen in some other species of Lycaenids like the Sloe Hairstreak (S. acaciae) but the white line is very distinct in Blue Spot Hairstreak which makes it very easy to identify. This white line is very clearly visible also across the forewings. Therefore while resting, this butterfly species always keeps its wings folded up close which makes this distinct pattern of the white line and the blue spot very clearly visible during resting stage. However while in flight, it may be difficult to spot this unique pattern.

This butterfly is found in a wide range of habitats in hot and dry regions – scrubland, grasslands and woodlands including border areas of forests and open areas in forests. These habitats occur in all altitudes from sea level upto mountaineous regions at 2000m where it is mostly  seen flying in areas of open vegetation to lighly forested areas on the mountain slopes and also in the upland plain areas. The adults have been mostly observed feeding on nectar from wildflowers of plants which are very resistant to dry conditions e.g stonecrops (Sedum sp.) and lavenders (Lavendula sp.). It is not a very strong or frequent flier and is often seen resting on the plants.

It flies from April until July and is more common in hills and higher altitudes in the middleeastern Mediterranean region. This species has only one generation in a year.

The eggs are pale white in colour and laid in small groups on the tips of the leaves and soft  branches of the hostplants during summer. The larval foodplants are Rhamnus spp. (Rhamnaceae) and possibly oak. In Palestine, it is the Palestine Buckthorn. The eggs do not hatch until the winter is over. So the larvae emerge between March to May, depending upon the height of the habitat; in mountaineous regions, the larvae come of the pupa by end of May and begin to grow very fast. The larvae are green with cream coloured markings all over the body and also have very fine hair. They secrete a sugary substance which is eaten by ants.