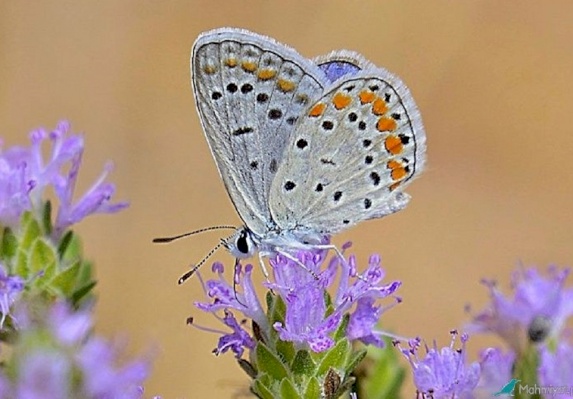 This small-sized butterfly with a wing-span of 35 mm belongs to the family of Blues- Lycaenidae and the genus Polyommatus has a very high number of species – 183 sp. and there are 2 sub-species reported in the Palestine – P. icarus zelleri Verity, 1919 and P. icarus juno Hemming, 1933.

This species is common and widely distributed in North Africa, Europe, middle-east and temperate regions of Asia.

In the middle-east, this butterfly is one of the most common species of Lycaenids found in the Jordan valley and Palestine, extending from the northern to the southern Mediterranean zones, including the desert areas.

The males and females have different wing colours which can easily identified even while in flight. The males have a fluourescent lilac blue colour on the upperside of the fore and hindwings with a thin black border all along the margin of the wings. The females are brown coloured like the Brown Argus (Arecia agestis) with some splash of blue on the base of the wings towards the abdomen or body and a row of reddish orange spots along the along the outer edges of the wings. The underside of the wings in males have a greyish brown colour while that in females is a more darker brown in colour.

It is found in a very wide range of habitats extending from open grasslands, meadows and woodlands to upto an altitude of 2000 m in the mountaineous regions as well as along the coastal areas. It is seen to fly in both sunny and shady areas. This species has also been observed in wastelands and urban habitats.

Several generations occur in a year and the species has been observed to be in flight from March to November.

The adult females lay eggs singly on the young shoots of the host plant. The larvae feed on plants belonging to the family Leguminosae.

The larvae are light green in colour with yellow stripes and the pupa is normally formed on the ground, from where the ants carry the pupae to their nests for attending on them. As a benefit, the ants feed on the ‘honeydew’ which is actually formed by the larvae during their development and later on deposit it in the pupa.

The males of the Common Blue are known to show very strong territorial behaviour while the females are more shy. The Common Blue male also very closely resembles three other species of ‘Blues’ – Silver-Studded Blue, Holly Blue and Adonis Blue.