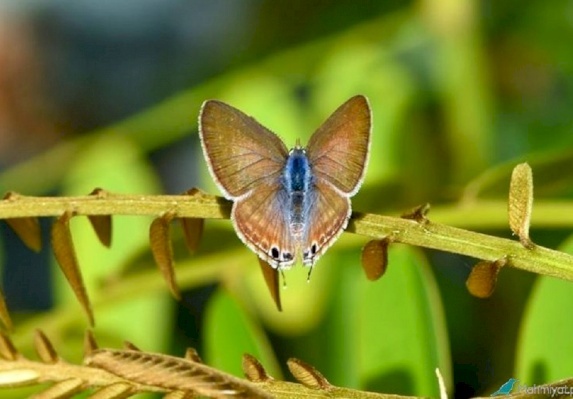 This small-sized butterfly also commonly known as the Pea Blue is having a wing-span of 24-32 mm for males and 24-34 mm for females and belongs to the family of ‘Blues’ or ‘Gossamer-winged’ butterflies – Lycaenidae.

This species has a very wide distribution in the Paleotropical region from where it also migrates to the Palaearctic zone. It is found all over Europe, Africa, South and southeast Asia including the middle-east and Australia.

It is a strongly migratory species and is known to fly northwards from its southern Mediterranean range. This species is known to fly all the year round, and two generations are known to appear in a year – one between May to June and another between September to October.

The flight of this species is very fast and while flying, this species appears to be shiny grey in colour rather than blue.

The upperside of both the fore- and hindwings have a shiny blue colour with two black rounded spots on the lower outer margin of the hindwings. The outer margin of both fore and hindwings have a silvery white and black coloured linings. The hindwings also bear a long black coloured tail, one on each lower end of the hindwing, which makes it distinctly different from other species of this family of ‘Blues’ and is also the easy identifying character for this particular species. The lower side of both sets of wings has a uniform light brown colour with a series of thin and wavy white lines, that also shows a similar pattern like the Short-tailed Blue (Cupido argiades). However the different character from the Short-Tailed Blue, is the presence of a very prominent and broad white band or sub-marginal streak that runs across the length of the lower side of the hindwings. The two black eyespots or marks with a silvery blue inner filling is also seen on the lower side of the hindwings towards the corner of the lower outer margin. These eye spots help to protect the butterfly from its enemies while at rest.

The males have a very striking violet blue colour on the upperside of the wings while the female have a mixture of a paler shade of blue and brown.

It is found in all types of habitats but is seen more in abundance in hot places with dense flowery vegetation and also those places where the larval food plants are available are abundantly present e.g. pea plants, broom etc. It is also seen frequently flying in flowering gardens and is also considered to be a pest of pea plants. Sometimes it is also seen flying in low-lying coastal areas with open vegetation.

During hot summer conditions, this species has been recorded to complete its entire life-cycle within one month. The larval food plants mostly belong to the family Leguminosae, Compositae (Carduus argentatus) and Fabaceae (Colutea and Tephrosia sp.). The adult females lays the  eggs inside unopened flower buds. When the larva hatches it is known to eat all parts of the flower. The larvae are infact known to grow inside the flowers and the pods of the peas which is also a good way of protecting itself from its enemies.

This species is assumed to have originated in Africa some 7 million years ago and then spread to other continents. It is a strongly migratory species and is known to fly northwards from its southern Mediterranean range as the season makes progress. The males show a very strong territorial behaviour especially during the mating season.