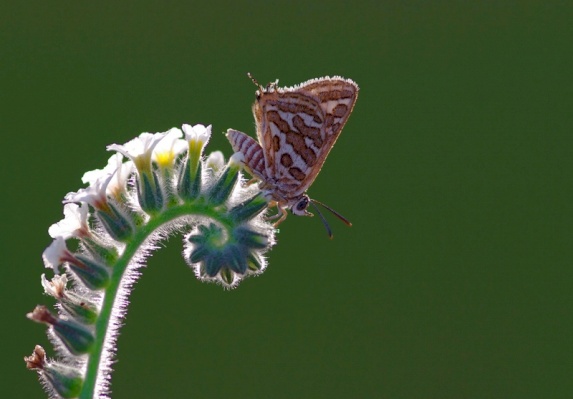 Also commonly known as the Arab Leopard butterfly, this species belongs to the family of Blues –Lycaenidae.

It has a wide distribution range extending from North Africa and across the middle-east upto the Indian subcontinent.

It is known to be an ‘Eremic’ butterfly with two sub-species that have been known to be recorded in the Palestine – A. acamas acamas Klug and A. acamas egyptiaca Riley. This sub-species is common in its distribution.

While the upperside of both fore and hindwings have a light brown coloured background, the underside of the wings has a white background.

The distinct character for identifying this species is the unique design on the underside of the wings – the leopard pattern stripes of yellow, orange and black against the white background which makes it easy to identify this species while resting with wings folded up.The lower borders of the hind wings have tail as like the species from the ‘hairstreaks’ group with a silver lining on the margins which usually shines very brightly in the sunlight.Another unique character of this species is the oversized abdomen with proportionately smaller sized wings.

The sub-species in Palestine has been recorded to fly from early spring until late summer and is also known to have three generations in a year.

This species mostly prefers open habitats like meadows and grasslands with flowering vegetation and is also observed in mountaineous regions. They are also known to fly very fast and mostly  close to the ground.

The adult females lay eggs on both the ground and plants. The larval food plants are not known. The larvae are associated with a particular family of ants.