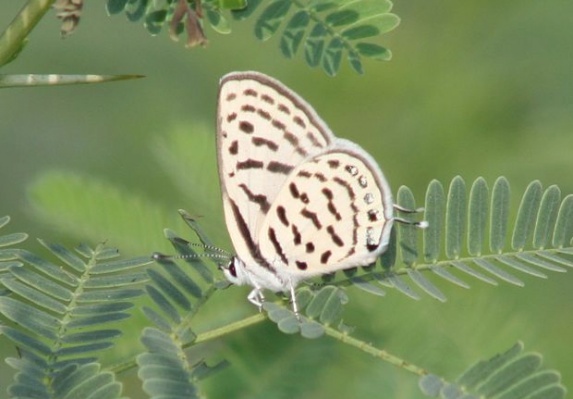 This small sized butterfly with a wing-span of 18-22 mm belongs to the family of ‘Blues’ , Lycaenidae Also commonly known as the Balkan Pierot or Little Tiger Blue, it is the only representative of the Tiger Blues, Tarucus sp. in the south Mediterranean region.

This butterly has a wide distribution range extending from the southeast Europe to North Africa, middle east and central Asia upto northwest India and the far-east.

This species flies all the year round except in January and February and with several generations in a year. The peak flight period is from April to October.

Due to the small size and quick flight, it is not very easy to identify this species except for this distinctive pattern of silvery blue eyes on the lower side of the hindwings which can be clearly identified while at rest with wings folded up.

This species usually prefers the desert and semi-desert  region with habitats ranging from hot dry scrubland to dry savanna or grasslands with open vegetation and permanent water bodies with a variety of wild flowers. It is found at altitudes from 400-1700 metres above mean sea level.

The Little Tiger Blue is mostly found in those habitats where there is a good availability of its host plants like the Christ's Thorn (Paliurus spina-christi), Paliurus australis, Ziziphus lotus, Z. leucodermis, Z. nummularia and Z. vulgaris.