Officinal storax is a short tree belongs to the Styracaceae family. It is native to southern Europe and the Middle East. leaves are white and covered with hairs on the lower side, alternate, simple, soft, round to ovate. The leaves In autumn turn yellow and in spring the budding is light green. Reddish stems reaches Up to 1–4 m high; with a tight, dark bark resinous on basal stems. A small very light green, stalked axillary bud is associated with each leaf. The flowers are axillary, bell-shaped, white and fragrant. The number of petals of tree is variable mostly 5, but often also 6 which is considered exceptional among dicotyledon plants.

It is winter-deciduous, flowering period from April to June.

The fruits is capsule or drupe, 12-14 mm; Seeds sphric-ovoid, light brown, smooth, it has a single brown and shiny stone with the seed, which contains a toxin, the fruit ripens in September-November.

Medical uses: This plant is the "official" source of styrax, an herbal medicine known from ancient times. Some believe it to have been the stacte used together with frankincense, galbanum, and onycha to make Ketoret, the Tabernacle incense of the Old Testament. The resin of Styrax acts to kill wound pathogens and deter herbivores. Consequently, for example, few Lepidoptera caterpillars eat styrax compared to other plants. 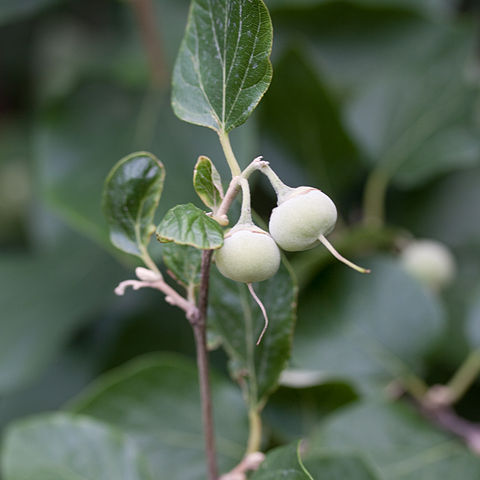