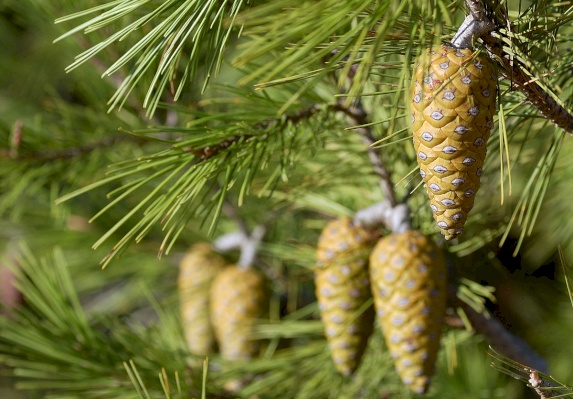 Pinus halepensis is native to the Mediterranean region. Its range extends from Morocco, Algeria and Spain north to southern France, Italy, Croatia, Montenegro, Albania, and east to Greece, all over Malta and northern Tunisia, Syria, Lebanon, southern Turkey, Jordan, Palestine where it is called Jerusalem pine.

It is a small to medium-sized tree from the gymnosperm Plants that belongs to the Pinaceae family .It is 15–25 m tall, with a trunk diameter up to 60 cm. The bark is orange-red, thick, and deeply fissured at the base of the trunk, and thin and flaky in the upper crown. The leaves are needle-shaped, very slender, alternate, distinctly yellowish green, and produced in pairs and rarely a few in threes. As with other pine trees, the Aleppo pine is monoecious, with both male and female cones on each tree. The cones are oblong, round or egg-shaped. When they first form, they are green. Eventually, they turn brown as they age. The seeds are spread to new areas by wind after the cones mature and open.

Ecology: Pinus halepensis is generally found at low altitudes, mostly from sea level to 200 m .The tree is able to quickly colonize open and disturbed areas. It can grow on all substrates and almost in all bioclimates in the Mediterranean. Aleppo pine is a popular tree in hot, dry areas. The Aleppo's tolerance for heat and drought and its fast growth are highly valued in these areas.

Uses: The wood of Aleppo Pine is presently used as firewood and for charcoal burning, in the past it served for mine props, railway sleepers, and telephone poles. It is rich in resin which is is used to flavor the Greek wine retsina. Witches brooms are common in this pine and could be a source of dwarf cultivars in Mediterranean countries; the species is generally not hardy in more northern latitudes. It has been planted as wind breaks and to stop soil erosion on dry slopes and used as ornamental tree, it is planted also for its lumber, which is hard and dense.

Threats: Coastal development, especially for tourist accommodation, has reduced the area of occupancy locally. Fires commonly destroy stands, but the species is fire adapted and unless fires are too frequent, it will regenerate.