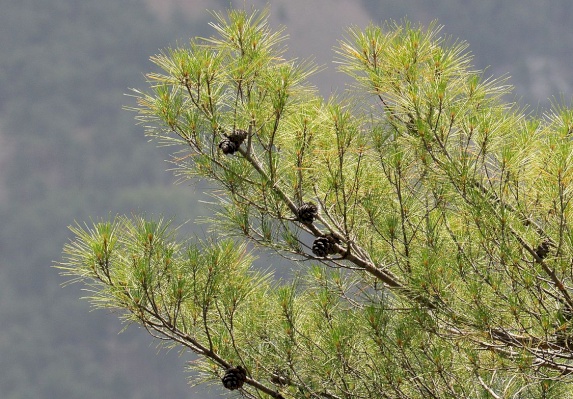 It is a pine native to the eastern Mediterranean region. In grows in Turkey and extends to Iran, Georgia, Azerbaijan, northern Iraq, western Syria, Palestine, Lebanon, and Cyprus. Its common name is Brutia pine, Turkish pine, or East Mediterranean pine.

It is a medium-size tree from the gymnosperms that belongs to the Pinaceae family, reaching 20–35 meters tall and with a trunk diameter of up to 1 meter. The bark is orange-red, thick and deeply fissured at the base thin flaky in the upper crown. The leaves are needle-shaped, entire, in pairs, slender, mostly 10–16 cm long, bright green to slightly yellowish green. No perianth , and the cones are stout, heavy and hard, 6–11 cm long and 4–5 cm broad at the base when closed, green at first, ripening glossy red-brown. They open slowly to release the seeds, opening to 5–8 cm broad. The cones are erect to forward pointing on short stout stalks, symmetrical, situated perpendicular to the branch. As with other pine trees, Brutia pine is monoecious, with both male and female cones on each tree. The seeds are 7–8 mm long, with a 15–20 mm wing, and are mainly wind-dispersed. The maturity of cones is reached in March of their third year.

Ecology: Pinus brutia is a coastal tree and is a drought resistant pine that withstands more aridity and poor soils than most timber species growing in Mediterranean climate. Although it requires mild winters, some of its provenances can grow successfully. Besides its good performance on poor sites, as a hardy species, it also has considerably faster growth rate on good sites. The species grows from sea level to the elevation of 1,300 m. The species is hardy and highly adaptable to various types of soils.

Uses: It is known as 'pitys' to the ancient Greeks, this is the most important forest tree in the north-eastern Mediterranean area. A sap-sucking insect Marchalina hellenica produces large amounts of honey-dew, harvested by honeybees and sold as 'pine honey' which has several medical actions. It is widely planted for timber, both in its native area or elsewhere in the Mediterranean region east to Pakistan. The timber is used for many purposes including carpentry, industry, general constructions, firewood and pulp.