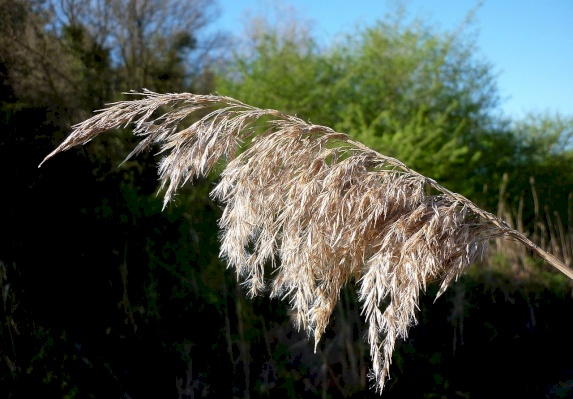 Common reed is one of the most widely distributed flowering plants, it is Hemicryptophyte belongs to the Gramineae family. It is native to Eurasia, Africa, and Puerto Rico (An island in the Greater Antilles in the Caribbean Sea ).

The stems are Culms 100-500 cm high, usually unbranched, glabrous. It forms large beds in shallow water; it has round, hollow stems, which typically grow to 2m in height, but may reach 4m. These stems grow from a system of stout, creeping rhizomes. Leaves are alternate, entire with parallel venation as they are monocotyledon plants. The flat leaves taper into a point, and are attached to the stem by smooth sheaths, which are loose so that the leaves all point in one direction in the wind.

The flowers are green, golden or purple with panicle and feathery inflorescence, flowering period January, October, November and December.

The fruits are Caryopses; small; hilum short; pericarp fused; embryo large. The Spreadsare by seed which is dispersed by wind and water; vegetatively through rhizomes and transport of rhizome fragments.

Ecology: Hydrophyte and hydro-halophytes; Salty and non-salty habitats. Common reed is widespread in both estuarine intertidal and palustrine persistent emergent wetlands. It often forms monotypic stands, as other species are excluded by persistent shading and extensive utilization of space by common reed .It follows the Plurireginalbor-trop botanical Chorotype.

Common Uses: It has the potential to be used in water filters; their spreading, creeping system of roots can remove nitrates and heavy metals from water. It has been also used in a building and craft material, for weaving mats, as a roofing material, as a source of cellulose and to create arrows and instruments. Medicinally the leaves and roots are renowned as a diuretic. Extracts of the rhizome have recently been found to be effective as an ayahuasca analogue and the dried extract (resin) has psychoactive properties when smoked. In ancient Egypt, Phragmites australis were used as a fermenting agent and a source of materials. It is depicted in numerous works of Egyptian art, and even originated a hieroglyph.