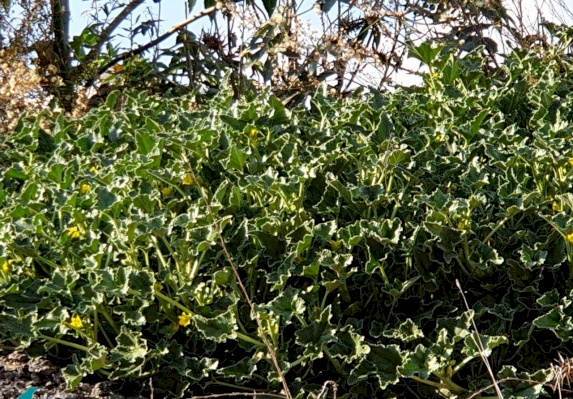 Ecballium elaterium is hemicryptophyte plant belongs to the Cucurbitaceae family. It gets its unusual name from the fact that when ripe, it squirts a stream of mucilaginous liquid containing its seeds, which can be seen with the naked eye. It is native to Europe, northern Africa, and temperate areas of Asia. Stems are Prostrate, procumbent, basal branching, hispid. The leaves of the plant are chordate with long, lobed, alternate, entire, dentate or serrate. Flowers are pales yellow, trumpet in shape with 5 petals, males are in raceme and females solitary. The flowers are monoecious (individual flowers are either male or female, but both sexes can be found on the same plant) and are pollinated by Insects. It is in flower from April to December, and the seeds ripen from Aug to September. Fruits are Berry, oblong-cylindrical, green, green-yellow when ripe; seeds 25-50, ovoid, brown.

Ecology: It is grown as an ornamental plant elsewhere, and in some places it has naturalized. Ecballium elaterium is most often described as a Mediterranean plant but it can survive in harsh environmental conditions, grows on heavy soils, It cannot grow in the shade. It prefers dry or moist soil and follows the Med - Irano-Turanian Chorotype.

Cool facts: Elaterium or elaterin is the name of the greenish substance extracted from the juice of the fruit that is used as a purgative.