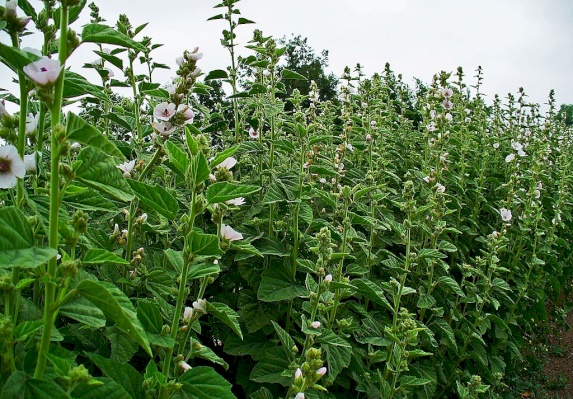 It is a perennial species belongs to the Malvaceae family , it is native to Europe, Western Asia, and North Africa. The stem is erect reaches up to 2 m simple, or with few lateral branches. Leaves are shortly petioled, roundish, ovate-cordate, entire or three to five lobed and leaf margin is dentate. Flowers are pink color, and are either axillary, or in panicles, flowering from July to September, and the seeds ripen from Aug to October. The flowers are hermaphrodite (have both male and female organs) with five petals , pollinated by Bees. The fruits are round in shape, Schizocarp, oblate or disk-shaped.

Habitat: As suggested in the name, marshmallow is found in marshy areas and other wet places, upper margins of salt and brackish marshes, sides of ditches and grassy banks near the sea and Cultivated Beds. Marshmallow can be grown in the garden with good soil and neutral pH. This plant is best in full sun, and since they grow to be very tall, the root is usually the portion of the plant that is harvested, It follows the Mediterranean botanical Chorotype.

Common and Medical Uses: The flowers and young leaves can be eaten, and are often added to salads or are boiled and fried. Strong teas are made from the leaves and used as a rinse for an abscess or boil the leaves, flowers and the root have been used in traditional herbal medication. It is traditionally used for irritation of mucous membranes, including use as a gargle for mouth and throat ulcers and gastric ulcers. The root counters excess stomach acid, peptic ulceration and gastritis. The root contains about 25-35% mucilage which is indigestible for humans. This mucilage gives it the ability to sooth and heal digestive system. The leaves also have this mucilage along with a trace of some essential oils and flavenoids. This mucilage is used as an anti-inflammatory, soothing agent, and a stimulant to healing. The root is used for digestive problems and skin irritations, while the leaf is used for problems with the lungs and urinary system.