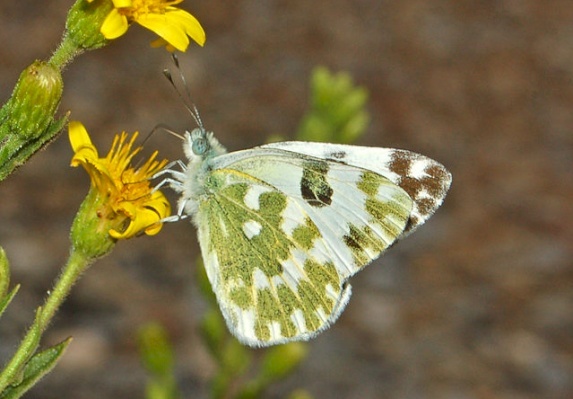 This is a small sized white coloured butterfly belonging to the family of ‘yellows and whites’ Pieridae. It is a very common species in the Mediterrranean region and exhibits migratory behaviour , often flying towards the north direction during the summer season. In Palestine, it is very common and widely distributed. It usually prefers dry areas with moderate to little vegetation, and is found on dry slopes and rocky ground surfaces. However this species can also be seen in open grasslands and areas of flowering vegetation. In the Mediterranean desert and coastal areas, this species is also seen to fly around the sand dunes.

The adults fly from March to October and have two to four generations.

The adults lay the eggs singly on the hostplants belonging to the family Brassicaceae and include such foodplants like the Arabis glabra and Cakile maritime. The adult caterpillars are white coloured with dark greyish black coloured stripes or lines running along the length of the body and marked with yellow stripes and black coloured rounded spots.

Two major sub-species of Bath Whites have been recorded in the Mediterranean region under this genus Pontia – P.daplidice and P.edusa. They look very similar from external characters and can also be distinguished by their molecular characters.