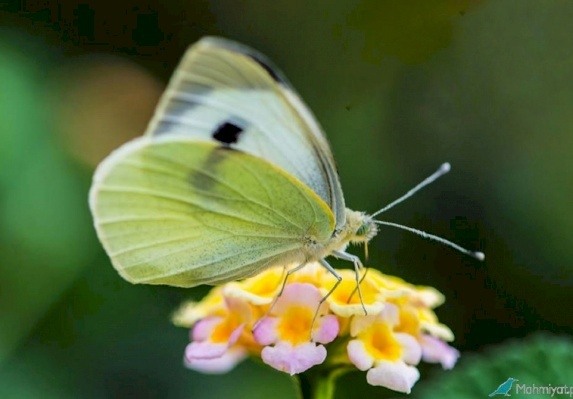 Also commonly known as the Cabbage White, has a very wide distribution range in the Mediterranean region, extending from North Africa and Middle east upto the Himalayan region. It is also found all across Europe and has been introduced in Chile in South America and South Africa. It is a strong migrant species, and start flying from early spring and keep migrating until early autumn. They tend to fly up northwards towards during the spring season and downwards south during the autumn. Some patterns of random migration in east-west direction have also been observed without return flights. They can migrate upto great distances of 800 kms. But generally also involves two generations where the point upto which one generation migrated to, the next generation takes up from that point onwards. This migration pattern therefore has made the distribution range of this species so broad. This species is normally seen in flight all throughout the year and also has several generations.

The adult butterflies have a wing span of 50-65 mm and white coloured wings with black markings on the tips of the forewings on the upperside. This pattern is seen in both males and females. However the females have two black spots on the upperside of each of the forewings, which is not seen in the males. The underside of the wings is pale greenish in colour which matches well with the leaves of the plants they are resting on and this protects them from their enemies. This species can be very easily identified in the field even while in resting stage due to the very plain white colouring.

The common habitat of this butterfly species is usually large open spaces including farms and vegetable gardens.

The adult females lay eggs in groups on the underside of the host plants. The larva on hatching usually remain in groups and feed on several species of the family Brassicaceae and Capparis spinosa (Capparidaceae). The larval stages are known to be ‘pests’ on vegetables like cabbages, thereby causing large-scale damage to various types of vegetable crops.

An interesting character of the large white butterflies is that they secrete a very strong unpleasant smell which keeps away their enemies like birds from preying on them.

The larval and pupal stages are also known to exhibit warning colouration which helps to drive away enemies. In the southern Mediterranean region, this species is known to hibernate during the winter months. The Large White is also a very close related species to the Small White, Pieris rapae The distribution range of this butterfly species in Palestine is very common