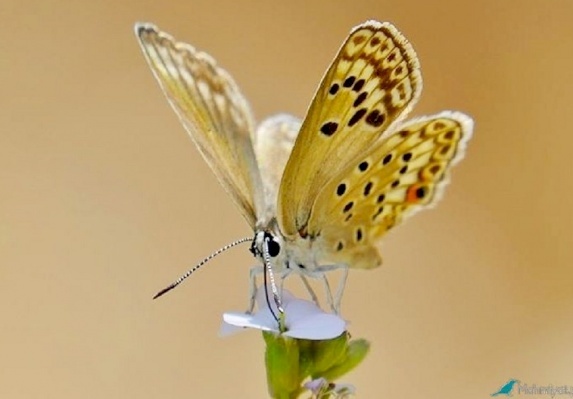 This small-sized butterfly belonging to the family of ‘hairstreaks, coppers and blues’ –Lycaenidae is commonly known as the Grass Jewel. It has a wide distribution in the Mediterranean and tropical regions extending from Africa, the Middle East, Balkans, Arabia, Iran, and Afghanistan upto north-western India. Its distribution is also very common in the southern Mediterranean region -extending from Jordan upto Palestine.

This species flies all round the year except in January and also has several generations in a year, starting from April until October.

The upper-side of the fore and hind-wings are pale to darker brown in colour depending upon the region and season. The lower border or margin of the hindwings has a series of round black spots with small pale white markings below the black spots. Above the black spots are semi-circular yellowish orange coloured markings. The underside of both fore and hindwings are pale shiny brown in colour with a series of white wavy lines. The outer margin of the hindwings have 3 to 4 black medium sized spots with a thin, bluish white line at the lower end.

The males and females have similar patterns as described except that the spots and lines are larger in size and more prominent than those in males.

While resting with the wings folded up, the butterfly can be easily recognised by its black spots on the hindwings.

This species prefers hot and dry areas in grasslands and also rocky regions with very less grassy vegetation. It is mostly seen flying in disturbed areas near to human habitations and borders of agricultural fields. During summer, the butterflies are seen attracted towards flowering vegetation near to rivers and streams.

The butterfly has a very slow flight and normally when resting very low on the grasses, can be difficult to be seen. The adults lay eggs in the grasses. The body of the larvae are grass green in colour with a dark green coloured line running across the upper side of the body. The whole body is also covered with small white round bodies from which very fine hair is seen to grow out as the larva becomes mature. The larval food plants are Heliotropium and Indigofera.