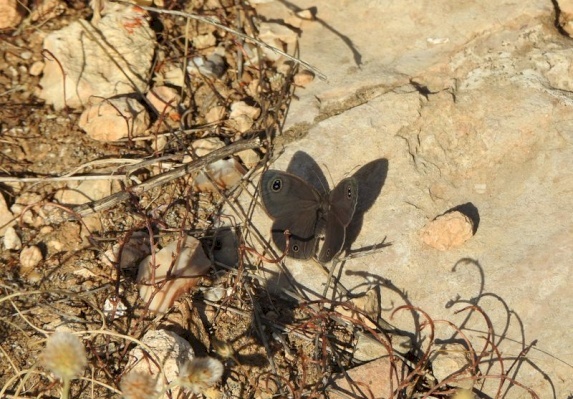 The African Ringlet also known as the Common Threering belongs to the sub-family of ‘Browns’ or Satyrinae under the family Nymphalidae. This brown coloured species is commonly distributed in dry and tropical regions across Africa and Asia. It is very common all throughout the Mediterranean region and in the Middle East is is widely distributed in Palestine, Dead Sea area and the Jordan valley. In the Middle East including Palestine, this species has been recorded flying both in the low-lying coastal areas below 400 m upto the mountainous areas.

The upperside of both fore and hindwings is mud brown in colour and the most distinct character is the presence of very prominent eye spots in both sets of wings. The eye spots in the forewings are larger than those in the hindwings. Each eye spot is round in shape and black in colour with two white small dots in the middle of the black spot which is again surrounded by a yellow coloured ring. One such eye spot is present on the upper and towards the outer margin of each of the forewings and on the lower and inner margin of each of the hindwings.

While resting with its wings folded up, the eye spots helps to drive away its enemies. Under fully sunny conditions, the species is seen to rest on grasses with wings fully opened. Even then the eye spots are very prominently visible and confuse the enemies.

In the Middle east, this butterfly is seen flying all the year round and produces several generations in a year from March to November. It prefers a warm climate and semi-dry to dry region, being mostly seen flying in rocky and stony areas and dry river beds. Although the adults have been observed visiting flowers, it is however it is comparatively less than other related species. The butterfly does not fly much and is mostly observed resting on grassy areas.

Eggs are laid singly on the host plant and it takes about an average time of 3 days for them to hatch. Eggs can be very easily identified as they are transparent creamish white in colour and round in shape. The newly hatched larvae are transparent green in colour but later brown in colour. The larvae feed on the grasses from the Poaceae family and particularly prefer Hyparrhenia hirta. 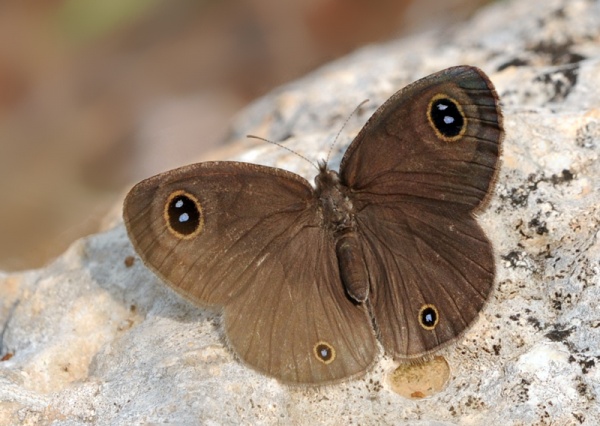