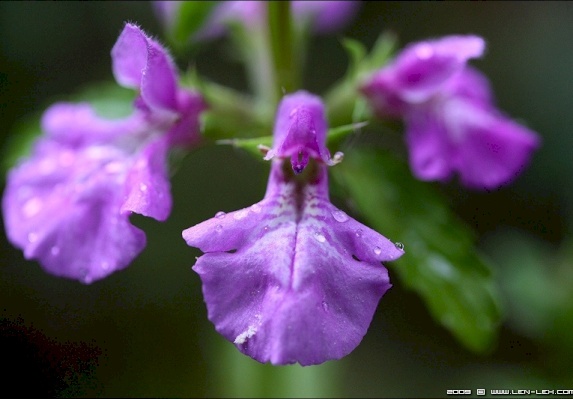 This is an herbaceous, annual plant species that belongs to the botanical family Lamiaceae. Its common English name is Nerved-calyx stachys. Stachys neurocalycina is native to the Mediterranean region and distributed in habitats, such Mediterranean woodlands and shrub lands, as well as montane vegetation. This species is common in most parts of Palestine and wider area. Nerved-calyx stachys flowers from March to May. The flowers are hermaphroditic, violet or light pink coloured, with connate and zygomorphic five petals, with double perianth. The corolla is cylindrical, but the petals are misshaped: the upper lip is more or less flat, in any case not heavily hollowed out, whilst the trilobular lower lip is longer than the upper lip. The four stamens protrude from the corolla, but do not exceed the upper lip. The five green sepals of the calyx are tubular to a shape of bell. The leaves, in turn, are simple, opposite on the stems, with entire, dentate or serrate margins.

As a whole, the genus Stachys includes about 450 annual to perennial herbaceous or small shrub plant species with nearly worldwide distribution, occurring in temperate, tropical (except Malaysia) and subtropical regions.

Furthermore, studies found that essential plant oils of the genus Stachys contain significant amounts of pharmacological substances, for example oils with antimicrobial activities and or antioxidant, antitoxic and cytotoxic substances. Due to these beneficial effects Stachys species have been used for centuries in traditional medicine also as astringent, wound-healing, against diarrhoea, as anti-nephritic and as anti-inflammatory agents. In addition, the extract of Stachys lavandulifolia has been newly tested on the treatment against neurodegenerative diseases.