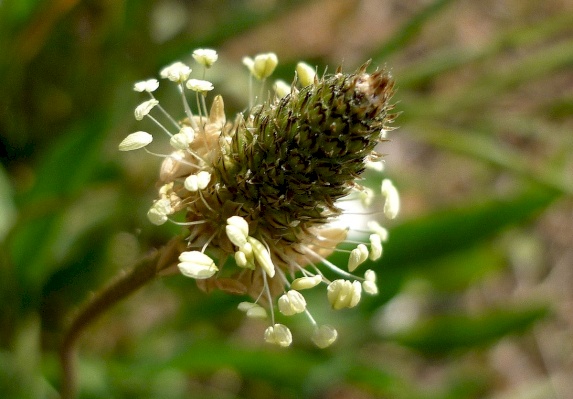 Plantago lanceolata subsp. lanceolata, this herbaceous perennial plant species belongs to the botanical family Plantaginaceae. It is commonly known as Buckhorn plantain, English plantain, or Ribwort (due to the deep veins visible on the leaves). Plantago lanceolata is native to Europe and Asia, but has been introduced to the Americas and many other parts of the world with suitable habitats, which vary from dry meadows to habitats with vegetation similar to a rain forest. This species is largely distributed, with a large population size, not facing any specific threats or risk of population decreasing. The flowering period of Buckhorn plantain is from March to September. Its leaves are dark green, lance-shaped, arranged in rosette and with entire borders. The blackish flower head is stubby and short that sits on top of a wiry stem, which is up to 40 cm high. The inflorescence, with green flowers is a raceme spike, since the flowers do not have a pedicel. Each flower can produce up to two seeds that mature from June to September. Buckhorn plantain is pollinated mainly by wind, but also by beetles and flies. The pollen of this species is one of the factors causing hay-fever in humans.

Plantago lanceolata can reproduce asexually through cloning, and sexually, when pollen is wind dispersed, which guarantees genetic variation. Populations that are reproducing asexually have low genetic variety. However, it can be a good alternative, when the conditions for sexually reproduction are not favourable.

Historically, Plantago lanceolata has been used as herbal medicament, such the leaves being used against wounds, diarrhoea, sinusitis, asthma, and bronchitis. The seeds have been used to treat parasitic worms and as laxative.

A parasite of Plantago lanceolata is the fungus Podosphaera plantaginis, which causes lesions that cover the entire surface of the leaves and stems. The populations of Plantago lanceolata can, in turn, react in different ways: some are more susceptible to the fungus strains, than others. Populations with highest variety of resistance phenotypes will have the highest survival rates.