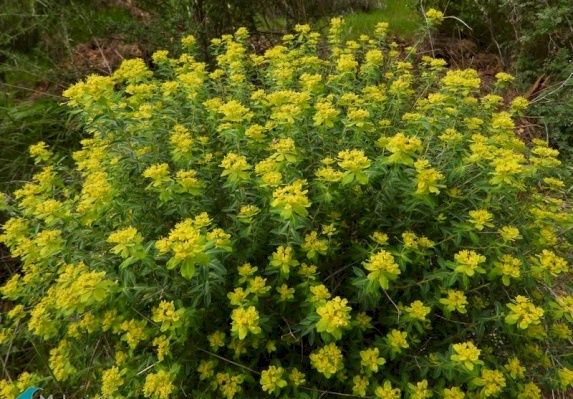 This perennial plant species belongs to the botanical family Euphorbiaceae. It is native for the Mediterranean area, being commonly found in the Mediterranean woodlands and shrub lands, semi-steppe and as mountain vegetation. Euphorbia hierosolymitana is commonly known as Jerusalem spurge. Generally, Euphorbia species may be confused with cacti plants, due to its succulent stems. The main difference is the sticky, white fluid with latex that Euphorbia species secrete and cacti do not produce it. Another important difference is the very tiny flowers of euphorbias, in contrast to cacti, which have big and colourful flowers.

The flowering period of Euphorbia hierosolymitana is from January to April. Its stems are 20-40 cm high, with dense branches. Jerusalem spurge fruits are capsules. Its leaves are linear and have entire borders. The flowers occur in a head inflorescence called cyathium, which is a floral receptacle with a high degree of extremely modified female and male flowers together into a flower-like system of organs. This very specialized feature is typical for every species of the genus Euphorbia. Each male or female flower in the cyathium head is very small and has only its essential sexual part, the stamen (male) and the pistil (females). The yellow/greenish flowers do not have sepals, petals and nectar, although other non-flower parts of the plant have some colour and some glands that produce nectar, to attract pollinators.

Euphorbia hierosolymitana stems produce a milky substance, when injured. This substance is characteristic from the family Euphorbiaceae, as a defence response to herbivorous insects, which can cause strong skin-irritation and caustic effects on humans, due to its varying amounts of diterpenes. Other components of this latex, such triterpenes and esters, when in contact with eyes, nose or mouth, may cause extreme inflammation. Furthermore, when several succulent euphorbias are cut in a greenhouse, the vapours can cause eyes and throat irritation until a distance of several metres. In contrast, in some regions, Euphorbia hierosolymitana has medicinal use against warts.