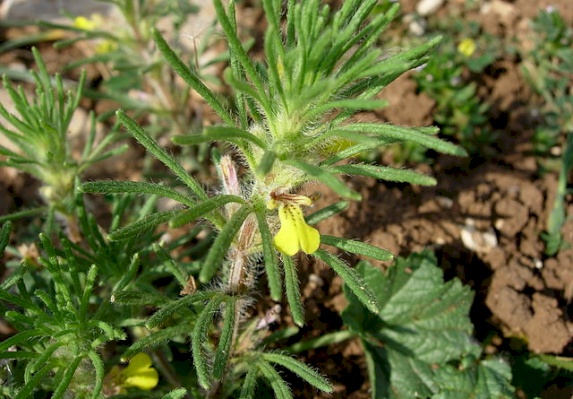 This herbaceous plant species is known as yellow bugle or ground-pine, due to its appearance with a pine seedling. It belongs to the botanical family Lamiaceae and it is common and native in East Mediterranean regions, growing in woodlands, shrub lands, deserts, mountain areas and steppes. It is also native in Europe and can be found till North Africa. On one hand, despite populations of this plant have been reduced in Mediterranean regions due to farming activities, the species is not endangered to be extinct there. On the other hand, in South Germany, this plant is in the red list of endangered species.

The yellow bugle is a perennial small sized plant, reaching up to 20 cm height. Its small flowers are yellow, with red spots, 3-lobed lower lip and short 1-2 lobed upper lip. The flowers have four stamens, are clustered around the stems, looking similar in form to snapdragon flowers. The leaves are grey/green, densely hairy, with a thick cuticle, which may serve to reduce evapotranspiration.

Ajuga chamaepitys releases its black seeds close to the parent plant and, curiously, the seeds can survive in the soil for up to 50 years. The flowers are hermaphrodite and are pollinated by bees.

Several medical properties are known for A. chamaepitys, such stimulant, diuretic and a good medicine against gout and rheumatism, despite the lack of scientific research on its properties. It is mainly used for healings, as part of medicinal practices in regions of the world where the species is more familiar. It was used by the Arabs for healing paralysis in animals and hysteria in horses. A. chamaepitys was also familiar to the early Tudors herbalists.