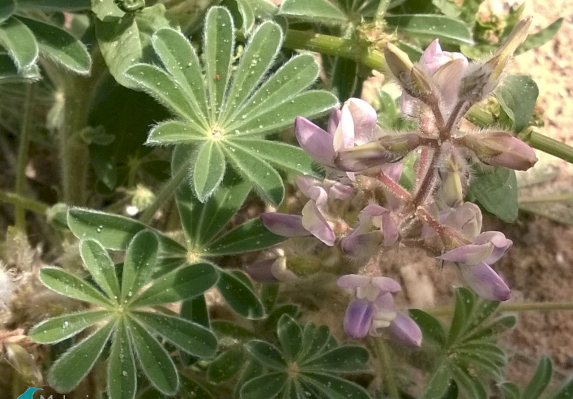 It is annual plant belongs to the Fabacea family , native to Palestine and distributed to south– eastern Mediterranean. The leaves are alternate, compound, digitate, which means shaped like a spread hand and the leaflets are smooth. The leaf blades are usually palmately divided into 5–28 leaflets. It is the tallest of the Lupinus plants, the stems reaches up to 124 cm in tall, always pubescent, sparsely sericeous. The flowers are light blue, lilach, white. Flowers are hermaphrodite only and blooming from February to April. The fruits are legume with 3-6 seeds.

Ecology: This species of Lupinus grows on the sand habitat, It is not succulent plant and have no spiny parts. It is glycophyte in terms of salt resistance and follows the Mediterranean chorotype.

Similar species: It is similar to Lupinus pilosus, commonly known as the blue lupine, which occurring from southern Greece through western Turkey and Palestine. Both are species of edaphic environments, but Lupinus palaestinus is generally confined to the light soils of coastal Palestine. Some studies have specified that the two species differ in pollination apparatuses, genic imbalances and partial reproductive barriers.

Plant uses: The legume seeds of the lupine were popular with the Romans who spread the plant’s cultivation throughout the Roman Empire. Lupins can fix nitrogen from the atmosphere into ammonia via a rhizobium-root nodule symbiosis, fertilizing the soil for other plants. This adaption allows lupins to grow in poor quality soil and in fact, improve soil quality so that other plants can grow. Lupinus is a source of high quality protein especially the amino acids ,in popular medicine ,it is known to be useful for people with diabetes problems. Most of the wild species are toxic due to high percentage of alkaloids , this commercially reduced as a result of domestication and soaking.

Cool Facts: Palestine Lupine is the tallest of the Lupinus plants.

Distributions in Palestine: The Mediterranean Woodlands and Shrublands and in the coastal area in the Gaza strip.