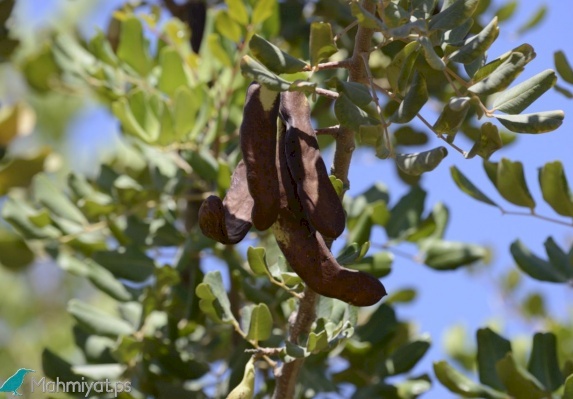 Carob is a perennial shrub or tree belongs to the Fabaceae family.

Leaves are alternate one leaf per node, compound, pinnate or bipinnate, with or without a terminal leaflet. Leaflets are smooth, round , and reach up to 7 cm long. Flowers are green-tinted red, spirally arranged along the inflorescence axis. Carob is a dioecious tree with some hermaphroditic forms; male and female and hermaphroditic flowers are generally borne on different trees. Unisexual and bisexual flowers are rare in the same inflorescence. Flowers are initially bisexual, but usually one sex is suppressed during the development of functionally male or female flowers.

Pollination Carrier: Wind or insects such as bees

Ecology: It is thriving in warm temperate and subtropical areas, tolerates hot and humid coastal areas. It is well adapted to the ecological conditions of Mediterranean maquis and forest and found in coastal areas with an of elevation of 400 meters. It is glycophyte in terms of salt salinity and follows the Mediterranean Chorotype.

Industrial and medical uses: The carob has a sweet taste and used traditionally in several applications and industries, it is used for commodities as ice cream and bakery food products. It is used in several industries including cosmetics, paints, polishers, and pharmaceuticals. The pulp is extracted to produce sugar and the powdered pulp is used for food ingredient and cacao. Carob powder consists of 46% sugar which is used for the production of industrial alcohol by fermentation, also it has 7% protein and small amounts of numerous minerals and vitamins. The main use of the seed is gum extraction. In medicine, Tannins extracted from the pulp act as an anti-diarrhoetic.

Cool Facts: It is the only Mediterranean tree with the main flowering season in autumn (September-November).

Distributions in Palestine: Mediterranean Woodlands and Shrublands, Semi-steppe shrublands, Shrub-steppes, and found in most mountains in the west bank while in the Gaza strip it is cultivated.