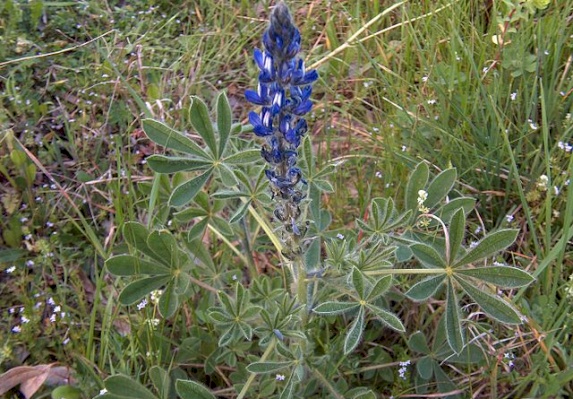 Blue lupine is annual plant belongs to the Fabaceae family. It is a species of flowering plant that native to Palestine where, it is found in Mediterranean scrubland. Leaves are alternate, compound, digitate (shaped like a spread hand) or palmate leaves; leaflets oblong-obovate, mucronulate, sericeous to softly villous. It has a single erect stems reaches to 30-70 cm tall. Flowers are dark blue with white vertical spot at the middle. The species bloom from February to May. Flowers are hermaphrodite only and Bees visiting the flower land on the wing petals, pressing them and the keel down. As a result, some pollen is squeezed out and gathered by the bees. Fruits are legume covered in velvety down; 3-8 cm long; seeds 3-4, orbicular. The Blue Mountain Lupine (Lupinus pilosus) is one of the most impressive annuals. It has fingered leaves and elongated blue inflorescences. Unlike other annuals, the seeds of the lupine germinate easily and compete successfully with weeds. One can easily create blue carpets since the plant self-seeds every year.

Ecology: Lupinus pilosus is an east Mediterranean annual species that grows in the Mediterranean regions of Palestine in open fields, grows up to an altitude of 750 m and on a variety of soil types. It is non-succulent plant with no spiny parts , it is glycophyte in terms of salt resistance. It follows the Mediterranean phytological zone .

Similar species: Lupinus pilosus and L. palaestinus are both east Mediterranean annuals, greatly resemble each other in morphology, and have the same chromosome number.

Uses and medical actions: Its seeds are eaten as traditional snacks after treatment. The seeds were roasted and mixed with malt grains and infused in boiling water to produce a coffee-like but caffeine-free hot beverage, Altreier Kaffee (Altrei coffee) in North Italy. The plant is common among the Palestinian mainly for patients with diabetes. It also helps to regulate bowel movements and to get rid of intestinal worms.