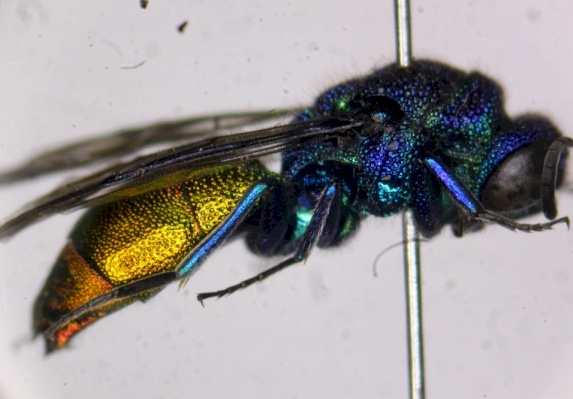 Chrysididae wasps This is a large cosmopolitan family of shining metallic coloured wasps, commonly known as cuckoo or emerald wasps. Chrysididae is almost entirely formed by several species of parasitoids and kleptoparasitoids (hence, their English name cuckoo), whose members parasitize mostly nests of bees and of other wasps. Around 3,000 species are known worldwide, from which more than 250 are found in Palestine and wider area. Interestingly, among these species, 59 were described as endemic in Palestine. In addition, several species of European origin also occur in Palestine. Measuring 6 to 12mm long, most of the Chrysididae species are characterized by metallic colours in green, blue, copper and gold. Curiously, true pigments such red, brown and white are very rare. Some coloration seem to be typical of a certain geographic region. The typical brilliance is highlighted by the carved exoskeleton sculpture, which has a complex punctuation and crests, holes with sizes varying from micrometric to millimetric.

Females Chrysididae present a reduction of their stinging apparatus, which evolved to an egg-laying tube with highly reduced valvulae and poison gland, the ovipositor. Thereby, differently of most other aculeates, these wasps cannot sting.

The most common are the species of the subfamily Chrysidinae, where their larvae feed on the host egg or larva while it is still young, then they feed on the food provided by the host (kleptoparasits). Interestingly, when disturbed, species of Chrysidinae can roll up their body in a defensive position. Legs and antennae are folded into special grooves and depressions of the face and of the thorax and the thorax is then folded on the abdomen. So there is no space for the sting of their host wasps. Members of the other subfamilies are parasitoids and cannot fold up into their body. Chrysididae species are solitary. Therefore, they are closely associated with other solitary wasps. Since Chrysididae species like more dry areas and sandy soils, these wasps fly mainly in the hottest and driest months of summer and prefer subtropical and Mediterranean climates.

The species are more limited to where they find host nests to parasitize, so the adults cuckoo wasps do not forage on flowers very often. They may be easier found, for example, on bare soil or on dead wood where other solitary wasps and bees may build up their nest. Yet, some species visit flowers such as of the Umbelliferae, Compositae and Euphorbiae.