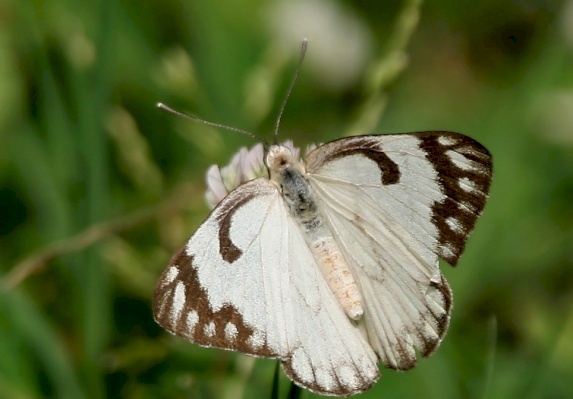 This beautiful small to medium-sized butterfly commonly known as the ‘Caper White’ or the ‘African Caper White’ or simply as the Brown-Veined White (more commonly in Africa) and belongs to the family Pieridae.  It has a wide distribution range extending from Sub-Saharan Africa and the middle-eastern region to the Indian sub-continent and also upto the north of the Himalayas in Tajikistan and Turkmenia.

This species is commonly found in semi-arid regions including deserts, grasslands dry open woodlands and scrublands with thorny vegetation and upto an elevation of 1200 m above mean sea level.

In Palestine, it is seen in the wide open  valleys with flowering vegetation and has also been recorded in the warm Jordan valley. However a study has also reported this species to have declined in Palestine and Lebanon since the 1940s and 1950s but is known to have recovered in certain areas.

The upper-side of both fore- and hindwings is cream-white coloured with broad veins having a black  border. The underside of the wings normally has a rich chrome-yellow colour. White coloured spots enclosed in black are seen in the tips or apical area of the forewings.

The larvae feed on the plants from the family Capparaceae, and particularly on plants from the genera Boscia, Maerua and Capparis sp. The adult butterflies are mostly seen nectaring on Acacia plants.

The adult females lay eggs in groups of 20 or more and the newly hatched larvae feed actively on the foodplants.

This species is a very strong tropical migrant species and is known to migrate in an easterly direction, after mating. During flight, they are followed and eaten by birds and dragonflies.

As the migration begins, and along the way are not only more butterflies known to join the group, but the mated females also make a stop-over to lay eggs along the migration route !!