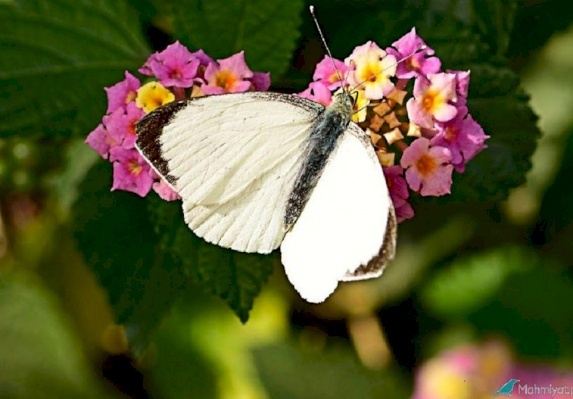 As the common name suggests, it is a creamish white coloured species with small black coloured dots or spots on the forewings. The females have two of such black spots on the forewings while the males have only one set. The underside of the wings is yellowish with very mild black spots.It is a migratory species and flies all the year round. This species can be seen in both natural habitats and urban areas. It mostly prefers open areas with a diverse vegetation. The adults lay eggs on both the wild and cultivated varieties of the cabbage family. The females lay the eggs singly and these eggs are golden orange coloured. Larvae feed on plants of the Cruciferae family like cabbage, and the adult butterflies prefer to take the nectar from flowers of alfalfa, Medicago sativa , including Capparaceae. The larvae are considered to be a serious pest on the cultivated cabbage plants. The adult butterflies are very strong fliers and can fly all throughout the daytime except in early mornings and evenings. They have several generations in a year.

A very common species belonging to the family Pieridae, it is also known as the Small Cabbage White. It is found in the Mediterranean region including the Levant and Egypt. It is also very common in Palestine.