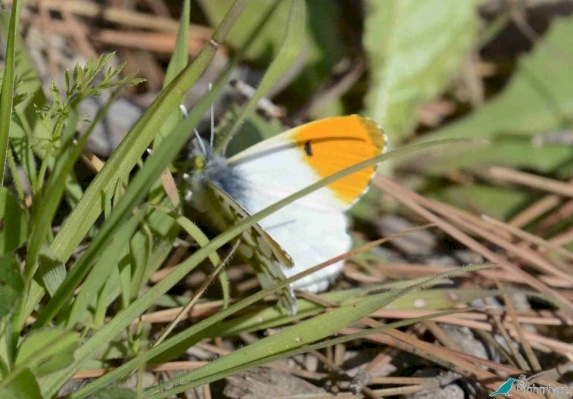 This species belonging to the family Pieridae is quite common in Lebanon and Palestine where is it commonly observed in the coastal and central areas of the West Bank region. They prefer open habitats like grasslands, edges of forests, and along river valleys.

The males possess that unique bright orange coloured patch on the tips of the forewings by which they can be quickly identified and hence the common name. However the females do not possess this orange patch on the forewings. The base colour on the upperside of the wings is otherwise white in both the males and females with black coloured markings along the outer margins of the forewings. The forewings also possess a black coloured circular spot, which is again a bit larger in size than the ones in the males. The underside of the wings is greenish white in colour with a pattern of black and yellow scales. While resting, the males are able to hide the orange patch on the forewings by folding them behind the hindwings. It has a single brood that appears in late February and the females lay single eggs on the flowerheads of the host plant.

The eggs are initially white in colour and later change to orange. The larva feeds on various plants of the Brassicaceae family including Torilis sp., Alliaria sp., Cardamine sp., Barbarea sp., Cochlearia sp. and Nasturtium sp.

Flight: Flies close to the ground