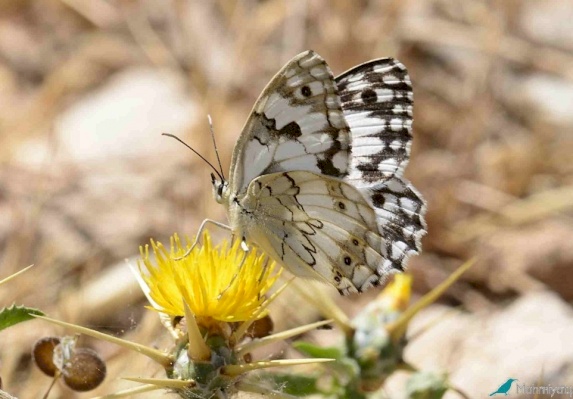 Commonly called the Palestine or Levantine Marbled White, this medium-sized butterfly belongs to the family Nymphalidae.

The adult butterfly can be easily identified by its distinct black and white check-like pattern of markings on the upperside of both fore-and hindwings. The background colour of the wings is white. The adults also have dark eye patterns on the wings.While only one eye-spot is present on the upper apical margin of the forewing, five eyespots are present on each of the hindwings. Each eyespot has a small black spot circled by a broad creamish white margin.

Inspite of its common name and a black and white appearance, this species belongs to the subfamily Satyrinae. In Palestine, M. titea has two subspecies – titania and palaestinensis. Both of these sub-species were observed in the northern part of Palestine with Beni Niem being the most southern locality.

Adults are known to fly from April to June and commonly observed to feed on nectar in small groups along the border areas of fields and forests. They fly very slowly and the females lay the eggs while flying, which means the eggs are simply dropped by the flying female onto the grassland areas.

The larvae eat the shell covering of the eggs and enter quite early into the pupa stage during the summer and finally come out as adult butterflies during the next winter. The pupa normally remain on the ground under the cover of the grasses throughout the resting period. They produce only one generation in a year. The larvae feed on plants from Gramineae and Poaceae families.

Sightings: It is found in Syria, Palestine, Armenia, Iran and Turkey. According to a scientific study, it’s distribution is limited in Jordan to the northern Mediterranean zone, but records from At Tafila proves its occurrence in the southern Mediterranean zone. A very local species, it is commonly observed in semi-natural areas with open vegetation like dry grasslands and meadows, shrublands, open areas inside forests and edges.