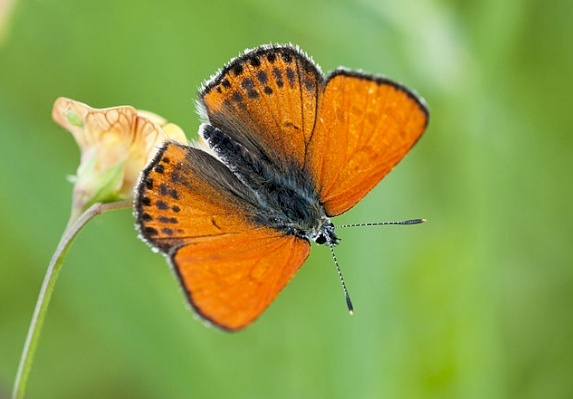 This small-sized butterfly species belongs to the family Lycaenidae. This species can be very easily identified in the field by its bright golden copper colour on the upperside of the fore- and hindwings and orange on the underside of the forewings only. The outer margins of both fore- and hindwings have a brownish black coloured border. There are two rows of brownish black coloured round spots on the lower apical border of the upperside of the hindwings. Similar rounded spots are also seen on the lower side of both the sets of wings. Depending on the season, some purple coloured markings are also seen along the lower margin of the hindwings (upperside). The underside of the hindwings is light brown in colour with a broad orange lining on the lower margin between rows of black round spots. Each of these rounded spots have a creamish white margin. Each hindwing also has a small tail on the lower side. It is found in hot and dry habitats like in scrublands and grassy areas with flowering vegetation.

It has also been recorded in river valleys, coastal regions and agricultural areas. This species has been recorded upto an altitude of 1600 m above mean sea level. It flies all the year round and produces two or more generations in a year. The peak flight period is from April to October. The larvae feed on a particular species of knot grass ((Polygonum aviculare) and are known to overwinter. The adults prefer to feed on flowers especially belonging to the Mentha species.