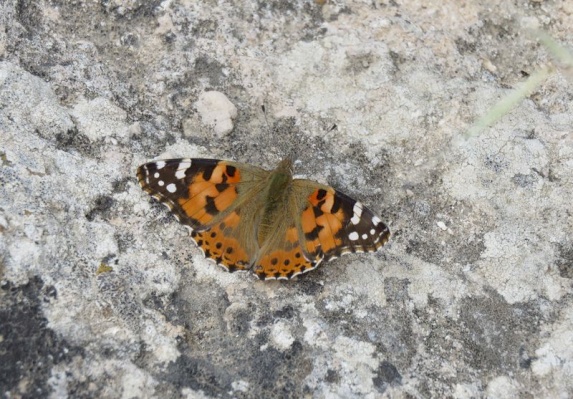 This is another very colourful butterfly belonging to the family Nymphalidae. This is a very common species with a very worldwide distribution. However in some tropical areas it is rare. This is also a migrant butterfly and large numbers of this species are known to migrate in the middle-east e.g, in the Jordan valley in north or north-western direction during the months of February and then again take a south or south-eastern direction during the later part of the year. These butterflies fly very fast in open areas and therefore difficult to catch. They prefer to inhabit open sunny areas like fields, parks, meadows and sand dunes.

The Painted Lady is found all over Palestine. It migrates to the north in both Lebanon and Palestine during March and April and it also migrates from Jordan to Saudi Arabia. The adult butterflies have orange coloured wings on the upper side with black patches. The tips of the forewings are black with small white patches. The underside of the wings has a combination of grey, brown and black colour with five sub-marginal eyespots. The females are larger in size than the males. The Painted Lady lays single pale green eggs on the host plants belonging to the families Asteraceae and Malvaceae. The caterpillars are purple to black in colour with yellow and green stripes and the entire body is covered with spines.

The migratory pattern of the Painted Lady affects the mating behaviour. It normally mates throughout all seasons, including winter. They start breeding during the migration and continue to reproduce throughout the migration period. Due to their continuous migration, the males are not known to exhibit distinct territorial behaviour.

The males are also known to mate with more than one female. The females lay large numbers of eggs singly on plants with good availability of nectar. So choice of host-plants for laying eggs is mainly determined by the availability of adult food sources even if it may result in a large numbers of death of the larvae. The larvae normally hide themselves within small silky nests on top of the leaves of the host-plants and protect themselves from their enemies.

The adult butterflies tend to fly towards the rain and studies have suggested that this probably encourages the females to lay large number of eggs and thereby secure a large reproduction capacity. The male butterflies have been observed to set up a particular “time and place” in certain locations that they find to be suitable for reproduction. This is how they identify certain perches, hilltops, forest-meadow edges, or other landmarks where they will stay until they find a potential female to mate.

It is particularly present in spring time.