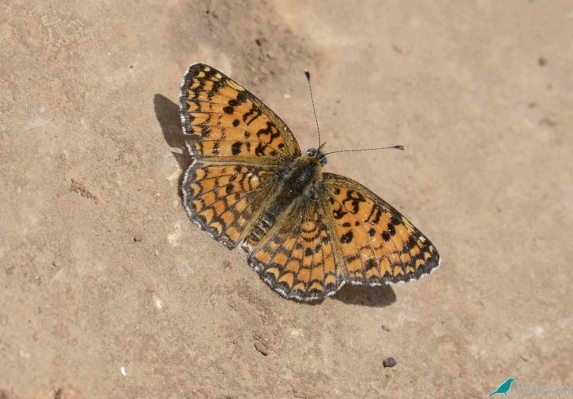 This beautiful golden orange coloured butterfly belongs to the family Nymphalidae and is a Ponto-Mediterranean species. They normally inhabit areas of open vegetation and woodlands and are seen to fly from early summer. In general, this species prefers semi-dry to dry habitats. In Palestine, this species is widely common in northern Negev but the distribution also extends upto the most southern regions. The Jordanian population is likely to have more than one generation in a year.

This butterfly can be quickly identified by their very prominent black spots and bars on the upper-side of the fore- and hindwings. The lower margins of both the fore- and hindwings on the upperside have white markings. The distinct pattern on the underside of the hindwings of this species makes it easy for identification – the colour on the underside is white with sub-marginal triangular spots, that are orange coloured with a black border.

They have a very fast and powerful flight.This butterfly species has only one generation in a year and the first brood is seen to fly in early spring (April).

The larvae feed on plants like the Scabiosa, Centaurea and Plantago species. The larva is black in colour and has a brick-red coloured head during the time of preparation for the pupa stage. The availability of larval food plants is a very important factor for habitat selection by this butterfly species, rather than the availability of sources of nectar for adult feeding.

Although this species is mostly common in its local distribution range, development and land-use changes are beginning to slowly affect the local populations. This species was only recently recognised as a distinct species (telona sp. ) and thereby commonly named as the Jerusalem Fritillary . This species is con-specific with M. phoebe ornate and therefore M.telona is considered as a synonym of M.phoebe. This separation was mostly based on the characters of the larval stages and genetic studies.