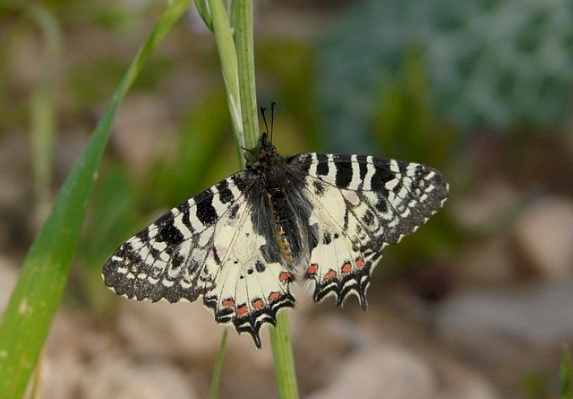 Eastern Steppe Festoon or The Lebanese Festoon. This medium-sized species belongs to the family Papilionidae.

It is native to the Mediterranean region and has several geographical forms. As the name suggests, in the Middle-eastern region, it is found in Turkey, western Iraq, Lebanon, Jordan, and Palestine. In Palestine, this species was recorded for the first time in 1983, and mostly inhabits the northern and central regions.

A common inhabitant of the open pine forests and dry valleys with flowering plants in the meadows or steppes, it is found in altitudes from 750-1750 m.

It flies from March to April in low-lying areas and from late May to June at higher altitudes.

The adults have wings that are creamish yellow coloured with black and red spots and bars. The black coloured bars are seen on the upper margin and sides of the forewings, while the red spots are seen on the lower margin of the hindwings. The lower borders of the hindwings have pointed edges on each wing. The females have more thicker or heavier spots and bars than the males. The abdomen in adult butterflies has light orange marks or bars along the sides. The legs in the adult butterflies are brown in colour.The larvae feed on the plants from the family Aristolochiae and usually form the pupas under stones. The larvae are white in colour with black and orange thorn-like warts on the body.

This charming butterfly is an ‘old-world’ species and very commonly found in the Palaearctic region.