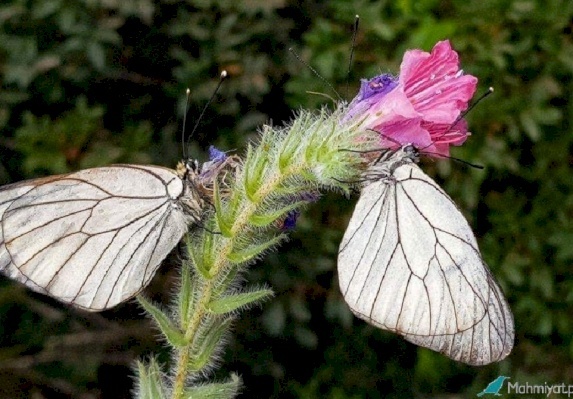 This large-sized butterfly belongs to the family Pieridae.

The common name ‘Black-veined White’ perfectly describes this butterfly with the upper side of both the forewings and hindwings having a translucent white colour with clearly marked black veins. While the underside of both the sets of wings has the same colouring pattern in males, in females the veins are brown coloured.The females are also larger in size than the males.  These distinct black vein markings on the completely white coloured wings makes it very easy for this species to be clearly identified from other ‘white butterflies belonging to the family Pieridae.
These butterflies are very commonly seen in grasslands, open meadows, orchards and house gardens.
In Palestine and the Jordan valley, this species occurs mostly in open vegetation areas like in meadows with bushes and in areas with fruit trees or orchards.
The peak flight period of this species is between April and July. This butterfly species is known to show a social behaviour and usually fly in large groups. The females lay eggs in groups of 30-100 on the host plant belonging to the family Rosaceae, where during larval stages they may also become pests. The eggs are initially yellow in colour and slowly become darker by the time of hatching. It takes about 3 weeks for the eggs to hatch and the caterpillars live and feed in a communal group within a ‘larval web’. They feed in large groups, being close to each other on the host plant and during the later developmental stage, spread to other parts of the host plant. The caterpillars are greenish-grey in colour. While the pupa stage usually lasts for about three weeks, sometimes the mature caterpillars overwinter and remain within a web-like structure that is build out of leaves of the host plant.
This species shows communal behaviour and is seen ‘roosting’ or settling down at one place for resting in large groups in open spaces. This kind of behaviour is probably handed down from the communal behaviour of the larvae.

This species occurs in the mountainous areas of the Mediterranean region. This butterfly species is widely distributed in the Palaearctic region in Western Europe and in the middle-east and Far-east (Korea, Japan) in Asia. It has also been recorded to fly across North Africa.