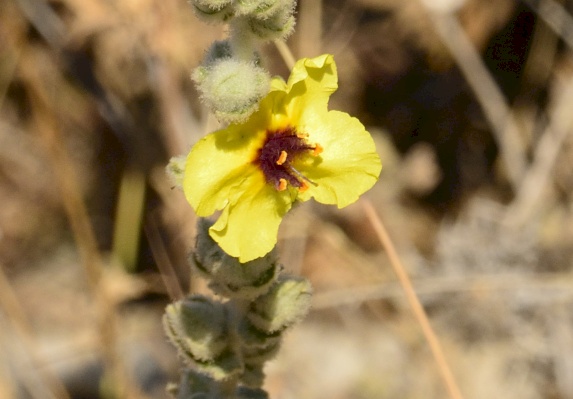 Wavyleaf Mullein is a biennial flowering plant which can grow in different habitats, preferring disturbed ground. It belongs to the Scrophulariaceae in the Scrophulariales order. It is originally said to be a native plant that thrives in the Mediterranean, it is also found thriving in many parts of Europe, some parts of Australia and the Americas. Leavers are alternate, rosette, entire, dentate or serrate, oblanceolate to elliptic and the leaves at the base of the plant are wavy. Stems are erect and branched from the base and reaches to 50-100 cm height. The flowers are yellow; filament-hairs violet and arranged in remote clusters of 2-7 flowers, Flowers hermaphrodite only and Inflorescence is freely branched, lax and flowering period from April to October. The fruit is a subglobose, mucronate, stellate-tomentose capsule with Homogeneous seeds-fruits. They are easily scattered by the wind or by animal or human contact, making mullein a very prolific weed in some areas.

Ecology : It grows in rocky and sandy places but also on banks and roadside verges ,it is glycophyte in terms of salt resistance , has no spiny parts and it is not succulent flora. It follows the Med – Irano-Turanian chorotype and it is obligate natural.

Medicinal uses : Mullein has a long history of medicinal use, primarily in European and American herbal medicine, and some selected schools of Asiatic herbal medicine and is known perhaps the world over as an all-natural remedy for coughs. When used as a medicine, its leaves and flowers are typically made into strong decoctions (in some cases, the flowers are much more preferred over the leaves) and used either fresh or dried and given to individuals suffering from coughs and asthma.

Other uses: It was used as a poison by the ancient Mediterranean peoples to catch fish in rivers and also used in traditional medicine. The ichtyotoxique power of plants in general is often accompanied by insecticidal properties. Verbascums are gifted with insecticidal properties against pests such as, aphids and pests of vegetable and flowering plants.